Yesterday was our last rehearsal before Thanksgiving break.
Sean wasn’t there, so I just watched Rat Queen while Jessica and Greyson did it the way they would for Beeville. It helped me really get it into my brain. I think I’m confident enough now where I can just go for it and not mess up the order and more than likely get the timing right. Jessica has been great at helping me learn all of this. She is SUCH a good Rat Queen, which I greatly appreciate since it helps me see how it should look. (I’m so visual.)
I had to go and try on the flowers costumes again, which worked out since the other dancer I needed to try them on with got there early, so we were able to do it when Mrs. Jane had some down time, rather than when there was a million people around. Since Emerson had to drop, they had to fill her spot with a couple of girls, meaning they needed another costume. Since mine was the smallest, they needed to move us up so they could use it. I was kind of sad, since that one was my favorite and the girl whose costume I always get had it the year before, but that’s okay. (Besides, I looked at the names in mine and some pretty spectacular people have worn it. So I can’t really complain.) Lauren (who is one of the 3 girls now wearing my old one) said it fit perfectly, to which I said, “you’re welcome. (I love Lauren 😀 )

After Battle scene, they ran through Snow. Since I’m not cast in Snow, I took this time to get all my ticket sales sorted and turned in and catch up on crocheting, while watching and learning. I love getting to watch, especially the warm up, because you get to see things you miss in class. You can see people who do it correctly and compare and contrast them to the people who need a bit of improvement and then think of how you do it and see how you identify with the person needing more improvement and how you can get it to look like the person who is doing it correctly. (Way to go Cheyanne, your pique’s at the barre were so sharp and flawless!)

We ran Act II a few times after Snow. The Chinese are really killing it, which is great. That core of girls are really a group to watch out for. They’re very driven. I was impressed with how well they did the role. (Their private lessons are paying off)

We ran Flowers (did I mention it was all in costume?) and actually did pretty decently. (Well, the petit fleurs. I don’t know about the other two, I can’t really pay attention to all three.) We messed up our ending part, but they weren’t too hard on us because it had changed last minute last rehearsal. Now we have it down, though. The second run through, we managed to not get a single correction, save for what they called out during. (I don’t know if this is actually a good thing, or if it means they just didn’t see us or notice us doing anything wrong. At least we didn’t get a chewing for messing up the same thing over and over!) Another flower was out, but hopefully not the whole show. Her appendix had to come out, which is what happened to Mari during Oz. (I swear, there’s a curse this season.)

At the end, the Nutcracker comes out as they dim the lights and close the curtain. We were all really excited because they are letting Emerson do it! It was so crushing when she had to drop because of her ankle, but this way she still gets to be a part. And she said it’s healing a lot faster being in the boot with crutches, which makes me really happy.

Yesterday seemed to be the day of breakdowns. Tensions were high and drama was inevitable at times and there were people I really wanted to slap around a bit, but you can’t do anything except try to hold your maturity rather than stoop to levels you shouldn’t stoop to. Some of the girls were just pushed to the brink, but they kept going. I just felt bad because once people noticed they cried, then people kept bothering them. I wish there was something I could do to help in these times, but I know sometimes the best thing is to leave them alone. I just love them so much.

I kept forgetting things. Not choreography, but things. Like I forgot my Mustang Tickets at home, and forgot my nude leotard, and then forgot my little notebook of choreography and my crocheting (Thanks for saving me, Rowlands!) and to check out the Rat Queen costume for next Saturday. All noninvasive things in the long run, but still things that would have been better had I remembered. I didn’t forget Judy! Which is great seeing that I was her ride home. I really love that kid. She’s an old soul and really aware and wise and funny. I don’t feel like I’m hanging out with a twelve year old with her. She’s pretty fab.

A cold front came in, which made it super exciting because our company jackets came in! I’m not going to lie, I saw mine hanging up today and thought for a second that Annika or someone left theirs at my house before I remembered that it was mine. I always wanted to be a part of one of those groups that had jackets. To know that I was enough to be wanted among them. To have talent and some sort of place. This all sounds way cheesier than I want it to, but the point being, it feels really good. Never say never. I’m twenty-seven, and am now a member of the Corpus Christi Ballet Company, and that feels good.

(polaroid of my jacket. It’s dark and stuff but I haven’t gotten a picture, picture yet.) 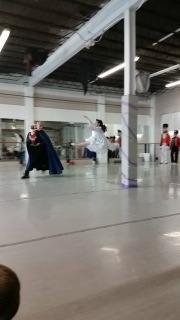 How long will I dance? Who knows. But I know that I’m there right now, and it feels good. 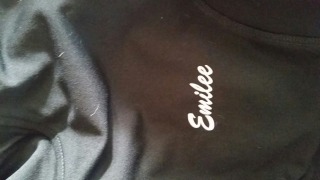