Once upon a time, Elizabeth and Abby invited me to go to the Houston Ballet with them since they caught wind that I had never seen a real ballet before. We planned it for months and the day finally came when we all piled into the car (along with Mrs. Jane) and headed to Houston.

Great conversation and many laughs keeping us company, we made it in good time and waited around a little bit while taking in the fact that we were actually there. (That was mainly me.) I let myself get excited since this was actually happening and we were in the lobby and the stairs are huge and magnificent and it was raining a little spit but the sky was still sunny and it was coming straight down instead of slanted like I usually see it. It was beautiful.

After it stopped, we went outside to get a picture in front of the theatre. Including my polaroid of the day. 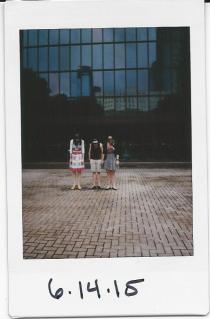 This stance started at the Wizard of Oz photo day and has followed us as sort of a joke. I had pictures of them each doing this on their separate shoots, which I edited together, but never with me in it. Perfect opportunity, right?
Little did we know it was a predecessor.

We walk back inside and a man in a white polo with a radio comes down and says,
“There’s been an incident on the stage and the show has been cancelled.”

After the initial shock, we stood there listening to what he was saying to the other workers on if it seemed there’d be hope to stick around. He told them to lock up the entire building, so we accepted our fate.
Another worker told a man that there was a fire alarm that opens these vents on the stage that were open when that rain came through and it got all over the electrical cords and lights and they just didn’t feel like it was safe to turn it on.

Darn you, rain! Why were you so beautiful if you were so evil?!

It was very sad indeed.
But thankfully, I was with great people.They also understand that sometimes things happen to help us avoid other things that could be potentially harmful or whatever and the trip didn’t feel wasted since we like spending time with each other and there was plenty of that in the car up and back.
(Elizabeth is such a great driver, I was really impressed. Especially in all the rain we went through and all the construction. Not all my friends are good drivers. She is. This does more for me than people realize.)
(I was bummed because it was one of the principal dancers last shows and I’ve always wanted to see a show where someone retired because I’ve heard it’s magical.)

We stopped for lunch before heading back and the skies could have fooled you that rain was ever there.
It’s funny, because this is why I typically don’t let myself get excited for things. (See: opening line of this blog and the concept of this blog.)  Sometimes things seem to happen that keeps me from doing the thing I’m excited about. I’ve had to learn to deal with this over the years, as unfair as it can be, but honestly I think I’m better for it. And I understand that sometimes there are unforeseeable circumstances that it’s keeping me from. (That one time the plan I would have been on went down. That time I missed the car wreck. That other time I missed the car wreck. That other other time I missed the car wreck. You get the picture.)

The drive back was just as great as the way up. I laughed harder than I have in a long time, and many inside jokes were made (inflatina, anyone?) plus encouragement given nonchalantly. Not to mention the endless, “remember that one time we went to the Houston Ballet?” to which I could honestly reply, “It’s the best professional ballet I’ve ever seen!”
I also got to tell the story of why Mrs. Jane means the world to me in a light manner and not one that seemed stupid or anything. So that was nice.

At the end of the day, I’m truly grateful that I was with people I like, and that the Houston Ballet wasn’t the one thing of the whole trip that was good or exciting. It wasn’t a complete loss.

They’re showing Manon around my birthday.
Do we dare?