This weekend is our last rehearsals at the down town studio.

Which is where I am currently.

Yesterday we ran the whole show all the way through in costume. I completely forgot about getting pictures, but it went better than I was expecting. I wasn’t sure at all how my body would handle it, and I was shaking by the time we were doing the center part of warm up.

I forced myself to keep a positive attitude. To not let my anxiety win out. I made myself take deep breaths before we went on for our first dance, hoping that it would encourage me to remember to breathe the entire dance. Apparently it worked, because I did the best I’ve done so far. It made me feel better about going into theatre week, but now I have to make sure I do the best I can to stay as healthy as I can be going into this week of long rehearsals and work deadlines and show weekend.

Honestly, I’m not letting myself think about it all. Because if I think about it all, then I realize how overwhelming everything I’m doing really is. Not to mention the pressure I feel people are putting on me to keep up with everything I have on my plate without showing any inch of wear. It’s exhausting. I can’t even let myself think about things past shows and deadlines, because if I do that I get this tightness and panic that sits in my chest and doesn’t help anything.

We’re here for another 3.5 hours. It’s our last bit of fine tuning and really getting the kinks out. Wednesday we begin rehearsals in the theater, and Friday is the school show. I won’t be in it, so I get released from rehearsal early Thursday as well.

I hope to make updates throughout, but I’m not sure if that will happen. But there will be pictures!
I hope you are all doing well!

Including this weekend, we only have two weekends left at the downtown studio before Selena week leading into show weekend.

We had Spring Break week off and came in yesterday to run the entire first act. All things considered, I don’t think it went that terribly. A couple people were missing, which sort of made it difficult since we were out of covers, but really for us it was alright since we’re all pretty confident in most of what we’re doing at this point.

The first time we ran it, I was shaking halfway through the dance and a large part after. The second time we ran it, i wasn’t shaking at all. It was weird. And it was as though I couldn’t even feel the normal “pain” you feel in pointe shoes the first round, but the second round it was exponential. This was beyond frustrating. I don’t like when I can’t figure out why something is happening the way it does, and when I don’t know how to fix or help it.

I got sick twice, but at good time. Right before our part and only once did I get back after we began. I actually had a pretty alright week healthwise, but that’s probably largely in part to the fact that I didn’t do a single thing extra outside of work (on purpose, to hopefully get through the next few weeks) and I’m thinking whatever this is is sort of cyclical. It seems that when I have a good week like this, the next week hits super hard. If this is the case, then I should be okay for show week. Fingers crossed.

Our rehearsal was scheduled to be 8 hours long. Most of us got to leave a little early, but still it was really fun to be surrounded by my friends for a whole day, just together.  I love this family I’ve found for myself. And I know people will come and go, I know the kids will grow up and more will be born, but I’m grateful to be here. Right here, right now. I’m grateful to have people who love me.

On my Instagram, I’m hosting a giveaway for a custom embroidery hoop made by my incredible friend. 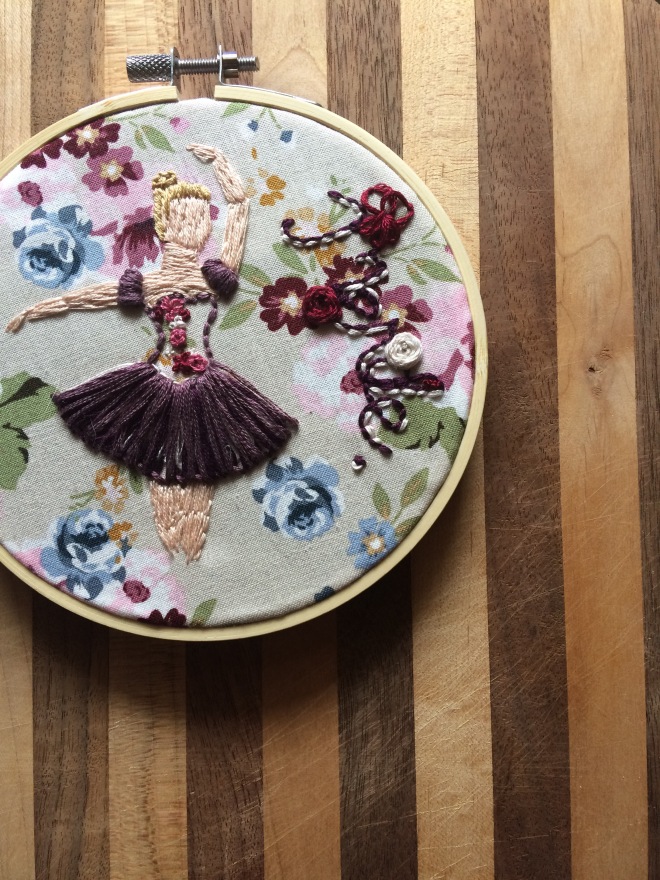 She did this one of me from a picture taken during nutcracker. My mind is blown by how beautiful this is. And in the giveaway, the winner can have her make one of a picture of themselves, Or of a favorite role. It’s pretty cool. Check it out if you haven’t already, here.

We have rehearsal today as well. I was supposed to go into work before and after, but now I’m just going in after. This is the role I struggle with, but I have to find a way to rally.

I love this show, I’ll be sad when it’s over, but my body will be grateful. Such a bittersweet thing, show season.

Next week is in costumes! Hopefully I’ll remember to get pictures.

Sometimes I write a post, and the theme of it really sticks with me. It begins to resonate as the time passes.

Sometimes, I write it only half understanding what I’m truly writing, just to have it fully show itself in the coming weeks.

I haven’t been posting much, and for that I apologize. Life has gotten to be quite complex here lately, and I don’t want to type anything fueled by rash emotion, or divulge things prematurely.

I can say that while life has been throwing it’s punches, the love and kindness I have been shown by various friends in the dance community has blown my mind and touched my heart in ways I can’t explain. I had to call in on a Wednesday I’m supposed to teach, and not only was my artistic director extremely understanding, but my friend pulled through to help out on last minutes notice. On top of that, I had no less than four different people text me. One to tell me how the kids did in class, which she didn’t know I was wondering how they held up and how things went. She just informed me because she’s a gem and brought such a peace to my mind that I needed. Others text me asking where I was and making sure I was okay. It made me feel so good.

This isn’t the first class I’ve missed, and usually it feels like no one really bats an eye about it. No big deal right? But to have multiple people message me reaffirmed to me everything I feel about this whole “ballet journey.”

Life isn’t going to be perfect, but sometimes just knowing you’re wanted makes all the difference.

I’m still waiting to hear back on my blood work. My follow up appointment isn’t until May, so I won’t hear from my specialist until then, but I should get the results back from the clinic before then. My chiropractor has also taken special interest in my health story, which is best especially since he also is an R.N. Having him willing to work with me to get me to my best is incredible.

Life is hard. But there are bits of beauty all around if you let yourself see them.

I also have super cool things in the works, hopefully to be revealed shortly. Still trying to work out all the details and get things set before I say too much 😂 but they’re exciting.

I hope you are all well. You are very loved and valued. Please remember that.

I probably shouldn’t have gone to class on Monday, but I went anyway.

I was exhausted, had to work late, and my brain was sufficiently fried, and all this was coming off the madness weekend.

Even though it was possible I would get sick, or pass out, or just be completely worthless, I wanted to dance more than anything else. My body longed to get lost in the movement and in the beauty of all ballet is. Even if I can’t do everything, even if my body limits me.

I was a little nervous because I didn’t know if I could handle a class that was filled with many corrections, or where I felt I was being watched more than usual. I wanted to be invisible. And I wanted to dance.

Thankfully, it was exactly what I was hoping for. And I left the class feeling weak, but my heart was full.

And I realized, half of what is wrong with me is that I feel so empty inside. I haven’t been able to do something just because I love it. We’ve either been so wrapped up in rehearsing the show and how that needs to be done correctly, or I just haven’t been well enough to go. But Monday brought me back to why I began this in the first place. It reminded me of why I love it. Which, honestly, was everything.

I apologize if I’m a bit silent. Life is currently pretty overwhelming and just getting through each day is proving to be difficult. But I’ll do what I can to still stay active as much as I can.