Yesterday was our last rehearsal in the downtown studio. The rest of them will officially be in the theatre and it doesn’t feel like this is even possible that by this time next week, Wizard of Oz will be a memory.

I don’t know if I’m ready for that.

(I am ready to be able to go to bed and not have the super buzzing-bee-cartoon-character-type music in my head all night, though, so there’s that.) (ps. that’s what the Winkie Guard Solo scene music sounds like.)

We were supposed to run it twice, but were only able to run it full-through once.
I got to do the Crows one last time, as one of the girls who is usually there wasn’t. I’m not sure where she was, but the poor girl has been sick for a while and dancing through it so maybe that’s it. I just hope she’s feeling better, poor girl has been working her butt off for this show. Of all the girls I’d have to jump in for, she and one other would break my heart.

Before and after Crows I ran the first scene with the girls in hopes that we would be able to show Julie that we mean business and are working hard. They were really showing some great improvement and I was proud of them. I think the hardest part during these studio rehearsals is their struggle with distraction. There are so many people and movement and things going on that if you aren’t completely focused, you’re bound to mess up. It’s even happened to me. The front people can’t afford this.
Sadly, one of the front girls messed up so they both got switched in the scene. It was a tough lesson to learn, but it happened anyway. The girls that got moved forward will do the part well. They know it through and through and I think the bout of necessary confidence will be great for them.
Most everything else seemed to show great improvement.

During corrections, we got chewed because a lot of the girls weren’t paying attention. (not all, but enough.)
It’s no wonder those are the ones that don’t know what’s going on most of the time. It takes a toll on everyone.
It’s exhausting to have to be the one to hold up the group, and I wouldn’t be able to without the couple other girls that are very aware of what is going on. Knowing I can bounce things off them and we can come to a conclusion is what keeps this scene afloat. If they would just do confidently what they know, they would shine. But I understand it’s hard at that age, especially with so many people watching and it being such a risk.

I sent a few of the pictures to the company principals when I got home (even though I’m kinda not supposed to?) and got to talking with my friend Abby.
She said this: 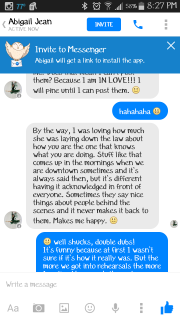 I told her how there are times I just want to shake some of the girls and scream “SHE JUST SAID WHAT YOU’RE ASKING ME LITERALLY TEN SECONDS AGO PAY ATTENTION.” But that’s not allowed. I then mentioned how nice it was to hear it, too, because before when I was involved in dance or theatre, to do what I’m doing here was a guaranteed way to get yourself stuck as an understudy. Instead of seeing all your hard work and taking it into consideration that you’d be a good person to rely on and cast in the role in the first place, they saw you as a solid back up to have for if the leads flaked like they were prone to. (yet they always seemed to pull it together for the show. All glory, no work ethic.) It’s really nice to know that working hard to make sure things still run smoothly in case something happens isn’t going to get me permanently benched, but instead will help me in the long run.
She then said: 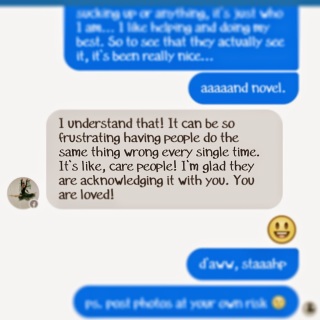 And this is when I melted into a puddle.
For the first time in a really, really long time I actually feel like I belong somewhere. That who I am is enough just as I am. That I’m not a failure or lacking or a disappointment, but instead a valuable asset. That hard work isn’t being ignored.
(Ps. I have really great friends that are there for me when I need it and quick to celebrate me when things go well. To have such people there for the highs as well as the lows is something I cherish. You people make the world go round.)

There’s this ongoing inner “struggle” of sorts over the gap between my skill level and my age.

For the most part, everything is okay.
But there are times when I just wish that I was better. That I had began earlier. That I could have been dancing all these years instead of just the past 3.5ish.
It can get overwhelming. Sometimes it feels pointless. Not that dancing for me isn’t good, but that I don’t add anything to the company. That I’m just the awkward adult that thankfully looks like she’s in high school so it’s not too weird putting her with younger kids.

It’s disheartening to have these dreams of progressing through the years, just to have my body mess up because I’m older, or to realize that things could happen and I don’t know how long I’ll dance.
What if I get married and can’t? What if I have a kid? What if I move? What if I break something? What if I throw out my back and mess it up for good?
Sure, all these things could happen and I could still be able to dance. But bad things seem to happen to me often, so my mind tends to try and prepare itself for the worst. Disappointment is rough.

Reality is that I may not get to dance long enough to improve enough to do everything I dream of doing, but that doesn’t mean I should just give up or not give it my all.

And maybe that’s the difference.
I’m not burned out on dancing. I’m not doing it because someone is making me. I don’t have a million opportunities of things I would like to try or whatever like most school kids do. I’m not still trying to figure out what I like and what I don’t and what might be nice or what I may or may not be good at.
I’m an adult, and I’ve mostly figured out what I enjoy and why and have pursued these things.
I’m dancing because I want to be here.
I also realize that everything could change tomorrow.
Just this weekend at rehearsals I found out a friend of mine who is a teen was diagnosed with stage III ovarian cancer.
Nothing is guaranteed.

I’ve journaled a lot over the years, and one thing that does for me is help me remember how people made me feel when certain things happened, or what I wish would have happened.
New school? I remember feeling beyond nervous, wishing someone would be kind and show me around. So when there was a new kid, what did I do?
Starting ballet for the first time? I remember shaking and feeling so insecure about where I was compared to the others. I remember no one talking to me and questioning why I was there. I also remember the girl in class who was the best coming to help me when I stood frozen in a corner.
What did I do when there was a new person after me? Introduced myself, learned their name, encouraged them after class. People would later ask me if I knew them before they came in. I didn’t, but I was them once.

Now I find myself in a unique position.
I am a twenty-six-year-old girl who made it through the horrors of high school, the nerves of college, the difficulties of family, the complications of roommates, etc.
I remember being 12-15 and being nervous and wondering if people liked me or if I was annoying. I remember seeing the twenty-somethings and wishing I was important enough for them to say hi to me. I remember being afraid to risk things because of what people would think. And now I see that what goes on in our heads mostly never happens. More than likely, people aren’t thinking you’re annoying, they aren’t hating you, they don’t think you’re unimportant, they won’t think less of you for taking a risk.
I remember being 6-11 and thinking the older girls were the coolest things in the world. I remember watching what they do and wanting to do that, to be that. I remember feeling so cool if they put their arm around me, or called me by name, or hugged me, or waved, or smiled at me, or countless other things. I remember seeing what they did and trying to imitate it.
I remember being in high school. I remember being too sad to function. I remember zoning out in AP US History because I couldn’t even find the energy to pay attention with all the darkness clouding my mind. I remember tearing up, drawing in my binder to try and keep the tears from falling. I remember dreading school, dreading tests, dreading report cards. I remember knowing I could do better but not being able to figure out how to be better because I was so depressed and no one would accept that because they were so used to me being happy.
I remember.

So although it was a little difficult to be cast as the cover for the Crows role next to all these kids younger than me, it was only difficult for half a second. Moreso, I was thrilled to be considered good enough to have that responsibility. (case and point: one of the covers has to do their role for at least one show. Good thing she’s a hard worker!) And even though chances are I won’t dance the part, there was a point when that wasn’t certain, and Julie knew that if she needed me, she could throw me in and it would be okay. (She even said this, about me and the girl who gets to dance the role one of the shows, in front of everyone.)
I dance it, full out. I enjoy the moment, even if it won’t matter. Because I’m having so much fun in this opportunity I didn’t think I would even get and want to show them that they weren’t wrong to trust me to cover the role.

I was torn between, “What a nice thing for my friend to say!” and completely fangirling.
My friend happens to also be the best dancer in the company. We are new friends, so I only really see her at rehearsals, but friends nonetheless. For her to say that how I danced made her want to be the role…I really can’t think of a higher compliment.
It washed all my concerns away.
I am capable.
I am worth being here.
My efforts aren’t pointless.
I’m not sucking as much as I thought.
I may never be a principal dancer, but that doesn’t mean that my dancing is for nothing.
You don’t have to be a principal dancer to inspire.
This is why I like being in my level, even though it’s not my age.
Because I can say something like this to the younger dancers.
I may never be a principal, but they could be. And if it takes a few nice words to help them get there, I’m going to hold nothing back.