Yesterday was my IV’s class, which the class I do pointe in. The class before us is the II’s, which three girls from Instep are in. (I just ended two sentences with a preposition. I apologize.)
The II’s got their pointe shoes over the holiday’s, and yesterday was the day they got to put them on and get them approved. I loved getting to watch their excited faces, as well as a few of those who were undoubtedly questioning what they’ve gotten themselves into. Some of them seemed to have troublesome feet, some of them just have absolutely tiny feet. Regardless, it was fun to observe anyway. Some of the girls in my class started coming in and would chime in their stories of the day they got their shoes. One couldn’t remember the day, which made me laugh. One of the mom’s was complimenting one of the girls from my class on her dancing. She is so beautiful to watch and just has the natural grace about her. I was glad she said something to her, because it’s true. She obviously didn’t know how to take the compliment, which was cute, but really, she’s one of the girls I watch and try to be more like. I love having her in class. (Plus she’s hilarious.) But she was one of the girls who kind of took me in, so I’m really grateful.

We started off at the barre yesterday. Ms. Lori was focusing on the details, which we don’t always do, but I was very glad we did. It’s something that many of the other girls know but I haven’t really been taught. I was glad for the slow and detailed, and even more so when she walked around looking at us and said, “That’s right, good!” to me. Especially cause I wasn’t sure I was doing it right, hah.

We also got started on our recital piece yesterday. There are 13 of us, and we are in 3 groups of 3 and one group of 4. Each of the groups have a different colored costume; light blue, orchid, mint, and light pink. The tallest are in one group which is where I fall, and we got to choose first on the color costume. We decided to go with blue, taking into consideration all of our skin tones and the fact that at least two of us were in the orchid shade of purple and didn’t want that again. Not to mention another group really wanted it. I’m excited because the tutus are detachable and will be great for photo shoots. Win!
One of the girls wasn’t there, which was fine for yesterday but makes me nervous in the grand scheme of things, because she was the one I had issues with during Nutcracker. Great girl but I feel she brings my dancing down. She doesn’t always pay attention and can lead to impaired and unprepared dancing. Then they frantically look to us, and I don’t want that responsibility and stress on me. The other girl holds her own really well. I like dancing with her.

The dance is more of a Balanchine’s Serenade style of dance, which is new and exciting for me.
There was a moment when we were blocking that Ms. Lori was trying to figure out the next set of counts where she just ignored the rest of us and moved. It was beautiful, breathtaking, even. I loved just watching her as her brain created the next set that would be ours to dance.

So far my favorite is this section we do in waves where the first three groups do an arabesque into a kneel in turn, and we do an arabesque and run forward to do a hand fancy thingy (yeah, perfect terminology, right?) that’s different from the others. Plus we get to be seen. (yay tall people seen!)

The music is all strings, from the Vitamin String Quartet. I don’t know the name because all Ms. Lori was told was “Tribute” which is really vague for this particular artist because all of their music is a tribute. I want to sit down and try and find it, though, but when I have more time.

I got complimented on my feet yesterday, which made me feel really good. It also kind of surprised me, because when beginning ballet I didn’t think I would have much give in me since I’m so old and you kind of peak at sixteen or so. Yet it seems that I have gained in flexibility quite substantially in the last three years, and the fact my feet are improving makes me really happy. 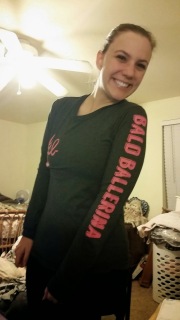 PS. I got home and found this was in the mail! It’s the shirt I ordered from a Ballerina named Maggie who had to put her career with Joffrey on hold due to breast cancer. Head over to http://www.baldballerina.com to find out more and read her story. Such a class act girl!

And here’s my cat.
Because, I mean, look at him.