Monday began the classes for our studio’s summer session.

I taught my first class of three to five year olds. There were thirteen of them. I was alone.
It could have been so much worse, honestly, but I did have quite a few “talkers” in the class, so it was a bit like herding cats. I didn’t get near as far in class as I would have liked, but all the kids did do all the things I asked, so I’m calling it a win. Towards the end, our studio owner came in to check on me. (There was a long line of parents registering their kids, many of whom were in my class, and she had been helping with that for most of the class time.) I only had eight kids registered ahead of time, giving myself the false sense of comfort that this class wouldn’t be too crazy. *Insert maniacal laughing here*

When our studio owner came in, she only had to corral a kid or two, and reiterate the “No talking” rule a few times. At the end of class, she looked at me and told me she was impressed with how I handled the class. She even commented on it again the next day to some of the other teachers that were there. It really made me feel good to hear that I was holding my own, even when it was quite a challenge.

The ME/CFS has been pretty intense here the past couple of weeks. I haven’t been sleeping well at night, which only exacerbates the problem. I had to be up early to put the house I was dog sitting at in order before leaving to the next house I am currently dog sitting at, then babysit for a couple hours before teaching. All of this on a long day the day before, and having not caught up from the previous weekend still. The kids really do help lift my spirits, even if they can be a bit challenging. It gives me the sense that I matter. That I’m still able to do something worthwhile with my life, even if it’s in a way I never expected. I’m so incredibly grateful to still be well enough to teach so many tiny nuggets, having even a brief brush stroke in the tapestry of their story. I hope it is a bright one in the grand picture of their life.

After I taught my class, I stayed so I could attend the Adult Ballet class. I haven’t been able to take an entire ballet class for over a year, so I wasn’t really expecting much. My hope was to get through barre and see how things went and go from there.

I was nervous, to say the least. So much has changed in the past year since I became sick. I’m nowhere near the level I was before I had to quit so abruptly. Even if, for some reason, the chronic fatigue went away, I still have the herniated disks in my back that are hitting nerves to consider. Thankfully, the class consisted of a few familiar faces, greeting me and letting me know how much they’ve missed me this past year. I’m sure I complained and explained more than anyone cared to hear. I tend to talk when I’m nervous, as though explaining things will somehow make it easier to handle. I still haven’t figured out why I do this, but recognizing it is the first step, right?

I noticed immediately the difference the herniated disks make in my dancing. Grand Battements were lower than 45 degrees on one side, and even that still caused some discomfort. Rond de jambes were a bit painful, and holding my core and thinking about turn out put pressure on muscles I had forgotten were so important, causing various joints to feel a bit of pain. I modified quite a bit, grateful that Ms. Munro knew about everything that was going on and that I didn’t have to be afraid that she would come and adjust me into a position my body can no longer make anymore.

Even as I felt all the twinges and tweaks of pain from this new version of my body I’m still accepting, I felt something I had missed more than there are words for. That all encompassing feeling when you know you’re doing everything you’ve been training to do the last however many years you’ve been dancing (6.5 for me, if you include the last year of not dancing.) You feel your body in alignment and know that your head is tilting where it needs to as you move, eyes following the line of the movement. It’s the feeling we all live for, the same one that can overcome us when we are on stage and really take in the moment of everything we’ve worked so hard to achieve. This time, I wasn’t on stage. I was in the studio I have grown to know as my second home, surrounded by old friends and new, hearing my teacher call out the combinations as I held on to the same barre that has been there longer than I have. It was a moment I believe my soul has been longing for.

This past year has held more changes than I could have ever expected. Not only was I diagnosed with ME/CFS, I was also dropped by my doctor as a lost cause, unwilling to hear me out or dig deeper into what is causing all the other things that seem to line up with a diagnosis she wasn’t willing to give me (though she toed the line as close as she could.) I’ve had to try and sort out what this meant for my quality of life and what I needed to do to try and keep it from getting worse, with no help from medical professionals. A few months later, Hurricane Harvey came and barreled through my hometown, ten months post storm and my parents house still stands like a ruin, gutted and full of holes and mold, taunting us as we fight with insurance companies and contractors. It changed the entire demographic of everything familiar to me. Places I used to frequent just don’t exist anymore, friends that lived down the street just took the insurance pay out and left, starting over somewhere else. Landmarks and street signs and places that made the town feel familiar and safe were gone, some damaged beyond repair. Home looks different now. In all that, my illness became more severe, causing me to have to leave my good and steady job.

Life as I knew it is completely different now. The one thing that has been consistent is the dance studio, but even that has had to have some adjustment, simply because I’m not the person I used to be. I can’t do shows, so my weekend aren’t consumed with rehearsals like they used to be. I hardly see all the friends I’ve made in classes since I can’t attend anymore. Even the things that are familiar are different.

And even though dance as I know it is different, that feeling is still there, grounding me in ways I didn’t know were still possible.

To my surprise, my brain held up more than I was expecting. The fatigue was greatly evident, and my joints and muscles were protesting, but I was able to stay past barre, cautious though I was.

I still had to avoid any sort of petite allegro, and when we got to turns I realized it had been a solid year since I had done pirouettes, but I was there, I was able to participate.

This was the start of me beginning.

I know I more than likely won’t be able to continue into the school year, simply because the classes go later and it does take me about 40 minutes to drive home and the classes are on the nights before I’ll have to be up early. But it does make me feel good to know that it’s not something I have to fully give up on just yet. And honestly, even if my health still remains in decline, I think ballet is something that will remain in me, to some degree, even if it’s not as prominent as I would like.

I only ended up having to sit out the grand jete combination we did at the very end, which was such a pleasant surprise to me. My brain felt pretty cloudy afterwards, and my body was weak and sore already, but I wasn’t shaking like I had before. I didn’t have to sit around and wait before I felt like I could handle driving home. I had enough presence of mind to focus safely without worrying if I might do the odd sort of black out thing where I space so hard its as if I fell asleep with my eyes open.

Yesterday morning, I woke up feeling sufficiently exhausted from how much effort I used the day before, but in a weird way it also had a tinge of feeling rewarding. I’ll still have to find a balance, and realistically I’ll need to find other ways to stay active since ballet will more than likely be too exhaustive for me to keep up with as much as I’d like, but that’s okay. I still get to keep my toes in the water through teaching, which I am increasingly grateful for.

Since my chiropractor–the only medical professional to believe me to any degree–has let me know that becoming stagnant will cause my health to decrease more rapidly, I have done what I can to find ways to still remain mobile. I replaced my walking shoes that the hurricane claimed and have also signed up for a water aerobics class with my friend Krista, the first class being today. I could feel it in my bones, but I am hopeful for how much it will help strengthen everything that has been so neglected, and in a way that doesn’t cause as much strain on my joints. (Plus I’m so happy to have someone to do it with me.)

There are a few exciting things happening this month that I can’t wait to tell y’all about, so please stay tuned as they unfold and if you have instagram, follow there for updates on a giveaway that will be happening soon! If you’re a fellow dancer, you won’t want to miss this one. 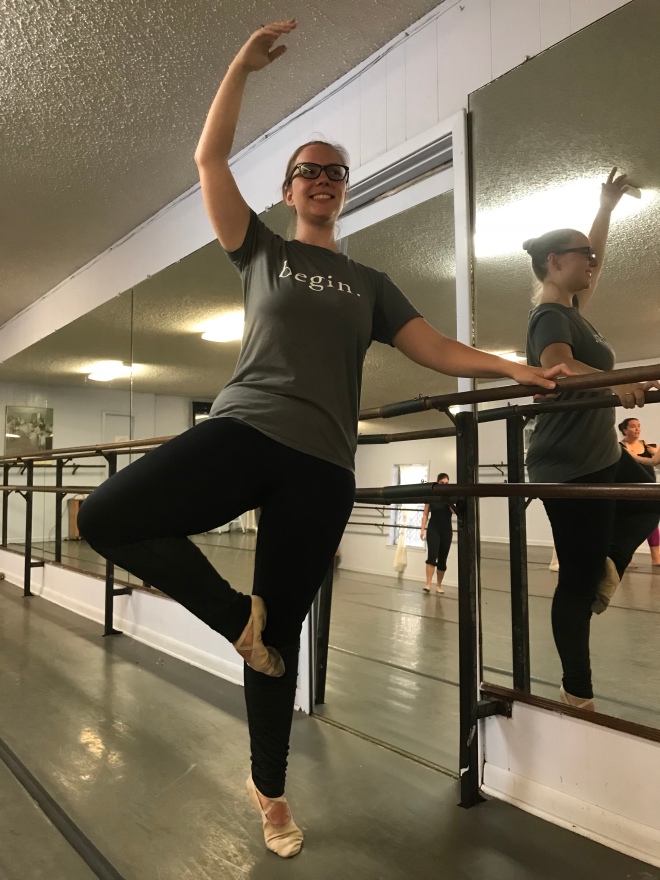