It’s been a while since I’ve had a class to post about, but never fear! Classes start again for summer today, and my first one is tomorrow.
I’m taking the intermediate level, which consists of levels 2, 3, and 4. I was torn about deciding intermediate over advanced, being that it will be geared more toward the younger ones (so I’m told?) and I don’t want my choice to cause me to be written off. But upon consulting a more advanced friend, as well as Ms. Lori, Intermediate is probably a good choice for me this year. 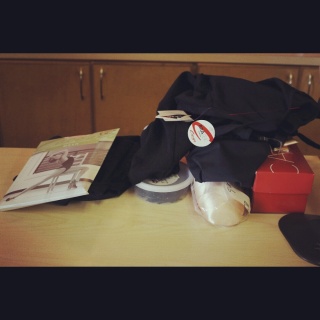 This is what I sent Lillian.
You’re welcome.
(please note the driver’s seat I was behind was occupied by a 6’5″ person and I was smooshed.)