My brain is pretty clouded due to a pretty rough day yesterday, but I really want to write about class because it was wonderful.

Abby taught our first class, the ballet class.
The only class I’ve ever taken with Abby was the first Variations class, but I have watched several of the classes she taught before mine during the school year. It made me want to join the class, even though it was two levels below me. Heck, I learned just from watching! Needless to say, I was really excited to take her class.

She has a really good way of explaining things and why they’re important. She’s able to show them in a way that is clear and easy to understand. I noticed I felt the same in her class as I did in Ms. Priscilla Nathan-Murphy’s class. She would correct us directly on what we needed to fix, and help us understand how and why. I think it also helped me having had that private lesson with her, to implement the corrections in a class taught by the one who corrected me. I don’t doubt that the other teachers are capable of correcting me, because they are, but she’s looking for the specific things she knows she’s shown me and can pick them out easily if I’m not doing them correctly. It was like the private lesson was continuing in a corporate setting, and I was able to take what I had learned and apply it and know if I was applying it correctly or not.
It felt good, and I noticed improvements in my turn out and my balance.

My friend from instep, Annabelle, made it back in town from college in time for class! It was so great and so much fun having her back in class. She just got back from an incredible dance missions trip to Panama and is trying to get as much dance in as she can while she’s home from college this summer. We haven’t danced together for about two years now. It felt like home. There would be random moments during class where I would get random bursts of excitement in realizing this was reality and I could look over and see Annabelle and it made my heart so happy.

(Annabelle was the first dance photo shoot I ever did.)

Second class was taught by Ms. Heidi. We ended up learning the Scarecrow variation from Oz, which was fun. I was really hoping to have a normal pointe class taught by her, since variations class is only Thursdays and I wanted to see what she would see and correct in me (especially since her feet are amazing) but Scarecrow was fun. I really appreciated how she showed me this one part I wasn’t too certain on how it was done (and neither were many of the girls) in the beginning. I still didn’t fully master it, but learning an entire variation in a short class is hard for me anyway. I got the releve part that was hard down and that’s what I really wanted to master, but it probably helps that I had seen it during rehearsals and took pictures of it since it stuck out to me. I ended up doing most of the variation on flat. We had broken up into levels, doing different things based on how advanced we were, and she focused mainly on the 2s, and somewhat on the 3s, so us 4s kinda got left with questions. We asked if she could do it wish us, since the parts that were different for us weren’t gone over as well and sometimes complex, and she said she really wanted to watch. I don’t remember if she watched or did it, because I was just focusing on listening to her call it out and trying to make it fluid. Ms. Munro was watching, too. I didn’t really like how I felt after doing it, but I think the variation would be fun with more time to work on it. I tried to work on doing characterization to make up for what I couldn’t do or attempt, and did the part at the end that she really wanted us to try. So I left feeling satisfied, at least. And I did my front splits for the first time! Not perfect, but I was flat over so whatever.

After class, Annabelle was telling me how much she loved being there. I was a bit nervous because she was in such a zone that I couldn’t tell if she loved it or hated it. It was a good zone and she loved it. She commented on how much she loved that Abby explained the different moves in ways that were easy to see and understand. She really liked her. I don’t know if she’s ever done a variation class, but she liked the challenge it posed yesterday. (poor girl, her pointe shoes are dying.)

I just want to go on record for this next thing. I know I’ve blogged about it before, but seriously.
Hannah Hooper and Ileana just have that thing about them. That inner grace, where you just can’t take your eyes off of them. Their dancing is so clean, even when it’s still a work in progress. It’s beautiful.
It’s what you hope ballet to be when you see it.
I can’t wait to see where these girls go from here. Absolutely beautiful girls, not just on the outside. Their hearts are pure gold and they are filled with such character. You can tell they want to be there. I love it.

After class, Abby made a comment to me that I did really well. That I did everything she wanted to see at the barre, but she didn’t want to keep commenting on it since it would have been so often. It made me feel really good to know that I was improving and that I was utilizing the corrections correctly. Annabelle told me I have improved so much, which really meant a lot coming from her. She was there when I first started out–panicked state and all. It’s easy to forget how far you’ve come when you’re looking at the process day by day instead of start to finish.
But you have to start if you want to ever finish. 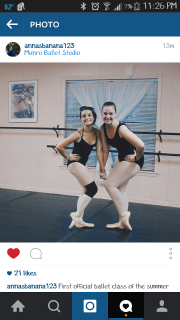