I just posted a super difficult blog post that I’ve been trying to write for a few months. I also thought about waiting until the summer to post it, but feel that now is the best time. The details are there, but essentially this is my last year teaching. I also won’t be active on this account anymore. It’ll remain live, as will my blog, but I won’t be checking in on it. This has been an extremely difficult decision to have to come to, but it’s one I can’t avoid anymore. If you’d like to keep up with me, please feel free to follow my personal account @emileeayers or my poetry account @forthestranger (or my “nerd” account if you’re into that, @thenerdjacket ) I love y’all so much and am super grateful for the friends I’ve made over the years through ballet. Super proud of y’all and everything you’re accomplishing every day. (Thanks to Mrs Gigi for this picture from nutcracker this year. It’s super special to me.)
I’ll have a proper post after the trip when I can blog. I’m the meantime, please enjoy this photo of @ballerinakay that I am properly obsessed with. ❤️
Two years ago today, I met @allie_on_pointe in person! In NINE DAYS we’re going to London together! I truly cherish the friends being in the dance world as an adult has given me. ❤️
Caught the train, heading back to hogwarts. See you witches (and wizards) there!
The dance season started up this week! My classes started today, and I wrote a blog post about it. Now I’m gonna go sleep. Link in bio
I was at a Harry Potter convention this weekend with my best friend and had an unexpected ballet encounter. I wrote about it if that’s your sort of thing. Link in the bio. 💛🖤

I’m taking the Monday 5s, Tuesday 6s (sans pointe), Wednesday 5s, and Thursday 6s classes this semester, or at least am trying them out. I don’t foresee any issues, but you never know really.

Yesterday was the first official class of the Fall semester. I was glad for it, since it is likely to be my simplest class, and also since it’s a class I’ve taken before so I know what to expect. It also helped having my fellow 4s from last year in class with me. Familiar faces are always nice. There weren’t as many 5/6s in there as I expected, but maybe they’ll start showing up more in the coming weeks. Still, it was a fairly full class.
Somehow I managed to mess up my knee pretty good, and it was not having it yesterday. I still managed to do most of the class, but it progressively got more painful. It’s hard figuring out what to do about it or for it when it makes it difficult to even plie, which messes up everything else. The only thing I’ve found to truly help it is to rest and low impact things to keep it built up and active–like walking–but, ya know, I don’t really have time for that. So.
I didn’t realize how bad it was really hurting until yesterday. It had gotten better after having been in Europe for the two weeks, and I forget how easily it can mess up again if I don’t pay attention in plies.
It’s really frustrating, because it’s such a simple thing, yet it’s so pivotal, and not an easy fix. It’s under the kneecap and simultaneously feels bruised and like it can pop off with too much use. I’m assuming the tendon or muscle or whatever is under there is swollen or something. I have no idea whatever. It’s the knee they say I developed arthritis in. So I guess there’s that.

We did pointe, and I was actually able to do it. I was so excited. And that’s when I realized that the main thing holding me back is my knee. It’s the fear of the pain with the plie that keeps me from plieing well or enough, that messes with my stability. So I need to get this figured out. Brace makes it worse, taping doesn’t help too much and last couple times I taped it, it fell off before I could even get through class. (Beyond frustrating.) I couldn’t find my tape last night, so I brought my brace like it’ll do something. I just have to be really careful. And not kneel at all. And cross my fingers.

Elizabeth’s trick with shaving down my shanks really helped. 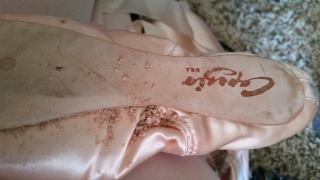 Lillian and I were working on these bad boys before class. I still need to do a bit more, but figured I’d try it out where I did it and see how it helped before shaving too much and ruining the shoes before my new ones come in. It feels good to finally be able to get a feel for your shoes and know what you want and how to prepare them. Not having the guess work so much.
Even though my knee is stupid, I’m glad to be feeling good in class. At least I have a better understanding and can move forward from here on how to help it.
I stayed for the 5s Jazz class after our ballet class yesterday at the invitation of Ms. Heidi. (That sounds super official. Really, she had a small class and asked more of us if we could stay.) I was limited, again, because of my knee, but it worked out really well despite it all. Much of the stuff was over my head, but I really like how open the environment is for me to learn. Even if I don’t stick with it, she’s willing to break it down for me. This, I believe, helps me as a dancer over all. There’s no way I could just jump into some advanced class that’s the level my fellow ballet dancers are and expect not to drown. I haven’t had a proper Jazz class since I was 11, and I don’t remember a thing. (except that we rocked those sequin shorts and N*Sync was the envy of all other recital songs.) But this class gives me the exposure to those things I miss out on because I’m not younger. It shows me a different side of dance and makes me a smidge more versatile. It opens me up and teaches me to really let go. Comfort zones aren’t important. It teaches me to really dance with my soul, to open up and show who I am through movement. To not let insecurities or fear of people’s opinions hold me back.
This not only helps me as a dancer, but as a person.
And then, when you start doing these things, and time keeps moving on, then you come across these moments when people are complimenting you, and telling you to take advanced ballet because you’re good, and telling you you’re a good dancer, and blowing your mind with these things you never really realized, and you know it’s true, because you’ve opened yourself up to be vulnerable. And it says, also, that not only is your dancing and technique good, but that your soul is.
And with that brain blurb, I shall end here.
❤