The favorite part of any Corpus Christi Ballet dancer is undoubtedly theatre week.
It’s when we take our rehearsals from our downtown studio to the Selena Auditorium and do everything on stage.
This is when it really gets real. The lights, the costumes, the stage, the audience, the wings and curtains and back drops and everything.

Last night was our first night of our first theatre week.
We rehearsed for the Saturday show, so I was Rat Queen. We only did partnered things in costume, so that landed me in the Rat Queen onsie and head. Hah.
I didn’t mess up any of the order, but it definitely is a bigger space to do it on, and way more difficult when you can’t see a darn thing.
I got critiqued for looking blank right before the lift (I had never done it in costume before and was like AH! but made it work. So. Warrented.) and for not grabbing the canon ball, since it had flown to the front of the stage and I had the perfect opportunity to get it.
That thing somehow manages to blend in with the stage, because even looking at the ground, I didn’t see it. This was also at the time that my left shoe had slipped off my heel, yet managed to stay on my foot, so I was going through the bit trying to work out if there was a way I could get it back on and also thinking of what was coming up that I would need it all the way on for. Turns out, no one even noticed and I made it work.
The partnering is a bit shaky, which makes me sad. Because I love to do it, and would probably look a million times better if we weren’t in these giant costumes with these huge heads, but that’s okay. Sean is great and makes sure I don’t hit the floor, so that’s nice. I think I’ll go over it with him once before we do it again to make sure we get the feel. We have first school show, so hopefully we have time to even do this. Regardless, we’ll make it work. I just want to do my best and prove I wasn’t a mistake being cast as Rat Queen. Mrs. Alex smiled at me, so that’s good. She knows I’ve never learned partnering before rehearsal.

There were many feel-good moments during rehearsal. I absolutely love being surrounded by so many people that I love so deeply. Especially in this time in my life where I’m surrounded by so much new. I didn’t realize how much I really thrive off of having something familiar near me until this week. My new job is absolutely wonderful, but there’s so much to learn and I suck at asking questions. I’d rather observe to learn, or just go with it, but there are things that I have to ask on and I feel kinda stupid and embarrassed. I gotta suck it up, and I will, but it still sort of shakes me.
Though, if that’s my biggest issue, then I’m doing pretty darn well. I’m trying not to freak out about tax season madness, since right now things are so low key. I’ll take it when it comes and do my best to make it through. I just want them to be glad they hired me, not feel any sort of regret or anger.
(Part of this is also probably from being so used to getting yelled at so much. Now that I’m not, it’s kind of a huge adjustment. A good one, but still takes time.)

I also learned how to properly tie my pointe shoes yesterday. (Thanks, Elizabeth) I never really understood the concept of why people would wrap one ribbon first, then the second, but she explained it and now I feel like a whole new world has been shown to me. I’m extremely grateful to have people in my life that are willing to help me fill the gaps where people assume I know what I’m doing. 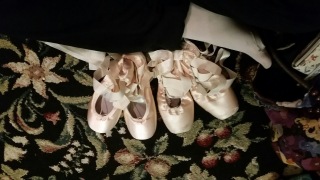