During warmup at rehearsal on Saturday, Ms. Munro made a comment.

She said that during auditions, we really present and give our all and look our best, yet when we have class and rehearsals, we do less than that. She said we should do our audition-best all the time. Pushing our limits and working hard every class is how we will improve.
These words were mostly met with grumbled excuses of how 10am is so early for a Saturday and glazed eyes spacing out on who knows what.
But I took that.
I thought of the girls that seem to get every role.
Of course, they’re talented, but so are these ones that get overlooked. What’s the difference?
I watched during rehearsal, and saw how those were the girls smiling through rehearsal–treating it like a performance. I know this isn’t always easy, especially in the learning process. But it is possible to give a little more to try and make it as much of a show as you can.
To treat it like an audition.
So I decided I will do just that.
From now on, ever class, every rehearsal is an audition.
I’m gonna try and keep my brain clear, so I don’t freak out. I’m going to tell myself I can do these things. I’m going to work even harder outside of the class room. I’m going to do everything I can to show them I want this; to better myself.
Yesterday’s class is the one day I can get away with slacking off, but I didn’t. I determined to implement this immediately.There were moments I faltered, but I tried to use every opportunity to add in extra and really give my all. Of course, there are limitations–especially for me. But I worked around the limitations, pushing them as far as I could, to get the most out of class possible.
I found myself sweating complete buckets, but also doing things I typically can’t do and trying things that would scare me. I made it through combinations I usually struggle with and even saw improvements on some of my steps, once even getting a “Good!” from the teacher who doesn’t really compliment.
I was even able to do an en dedan turn on my bad side, though that shoe felt better for some reason, making risk a little less scary. Curious to explore to find out why.
A humorous part of class was when we did a combination across the floor. I was doing pretty alright until it got to chaines. I tried on the first side, and honestly tried on the second side, until–ya know–I forgot my left leg is shorter and had my hips squared which meant the floor wasn’t where I expected it to be and it felt like when you miss a step walking down stairs. Pretty hilarious, especially since I didn’t get hurt. Hehe
I had a friend text me after class saying that I looked really good in class yesterday. Coming from her, I know she means it, which means so much to me, and fuels my fire even more. 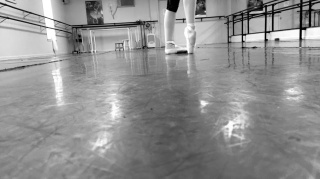 One thought on “Daily Auditions”