It is clear that learning a part as complex as the Swan corps is way more difficult as a cover than as an actual swan. I sometimes find myself wondering if the girls know how lucky they truly are to have their place set and sure, not having to worry about what the other groups are doing.
I was Abarrane for part of the rehearsal Saturday since she had ACT testing in the morning. It wasn’t too difficult, since she was the opposite of Adrienne, except for the bits I couldn’t remember. Oops.
But that’s okay. We got it fixed and worked out and all is well.
When Abarrane got there, I tried to watch for the people I know will be out coming up, and it got complicated. They are each something different. Then I come to the realization that even being this proactive won’t guarantee I’ll get the spot if someone drops. It could be a matter of height. These other covers are dedicated to learning it as well.

Instead of being overcome by bitterness, fear, and jealousy, I approached the girls with an idea: Let’s for some kind of group as the covers to make sure we enjoy this instead of just sitting on the sidelines sad. “Let’s be so cool the other girls wished they were us.” Haha.
Catherine and Maddie came up with a clever name–The Ugly Ducklings.
In the story, the ugly duckling tries so hard to be like the swans he sees, but just can’t be. (Until he grows up and realizes he was a wan all along, just needed a little growth.)
We want to make shirts. It’s gonna be great.
The girls are excited about it, as am I. We even have a fun little hand sign thing.
It still stings a bit to not be a swan. Seeing and hearing the other girls get so excited for costume fittings and photo day and all, knowing I just have to watch from the sidelines again. But it is what it is. There’s nothing we can do about it.

Instead, I had Ms. Heidi look at my shoes, and asked her what she thought. I’ve been told I don’t pull out of my shoe, but I don’t know what else to do to be better about that. She was able to explain what I need to think about, and give me some things to try at home to help me get better. It’ll take time, but if I start now it’ll be very beneficial.

In her Jazz/Lyrical class, we had a new girl, Valerie. She paired her with me since my partner wasn’t there to work on recital. I taught her our bit and we did it side by side instead of mirrored. I had no idea that the only dance training she had was dance class in high school. She took the adult ballet and said it was really fast, but she wanted to dance so she’s gonna stick with it. She really liked the Lyrical class, which was good. She picked things up really well and was able to just go with it, even though she didn’t know what half the stuff was. I was really impressed. She told me how she wished she would have started dancing younger, but was excited to start now. She’s from Austin, and down here for school. She seems like a great person, and it was fun to actually have someone in the class understand my cultural references from when I was a kid. (Lookin’ at you, Zenon, Girl of the 21st Century.)
Valerie is going to do recital, so Heidi was trying to think of how to work with the new numbers. She might have Valerie take my spot, and teach me a new thing entirely, thinking it may be easier to learn since I won’t be here a lot from work coming up. Which is exciting, but also a bit nerve wracking. 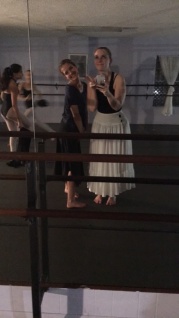 It was refreshing having Valerie in class. It reminded me of what I felt when I first started–that bit that can get lost in all the striving and stress. I still have a ways to go, and loads to learn, but I’ve come so far from that first anxiety-ridden day. And it’s not all about hitting one certain goal, it’s about the process. It’s about every day, working hard–not just one show or role. It’s about being better today than I was yesterday. If I can do that, I am successful.

(Repeat to myself when I’m starting to feel the sting again.)

One thought on “Beginnings”