Being that I work at a tax office, we are given the day after Tax Season ends off.
That means, this year it was the 19th.
I was able to be productive at home and running around hitting up the bank and post office and places I typically miss simply because I work when they’re open.

I had woken up a smidge panicked because I realized that the girl I had covered this weekend could potentially not yet be up to par. I really didn’t want to mess up her part or any of the placement or the runs or any of the sections I’ve been corrected on a million times. I debated actually marking it since it’s possible I could do all of that as her spot, only to end up being someone entirely different.

Instead, I laid there and envisioned each section I have trouble with. I picked apart the details of it and got the visual in my head of me pushing through and doing it well. If I tell myself I can do it, I’ve won half the battle, right?

I get to rehearsal and get a text from my friend saying she is indeed out again that night. I was really grateful to have the heads up so I could mentally prepare myself for what was ahead of me.

We started with Act I and went through the entire ballet. I’m not sure if it’s the props on stage, or working with where the light falls, or what exactly but the stage felt extremely small. Maybe I had just gotten it in my head that it would be larger than it really is, but we went with it. It works, and we actually did a really great run through without marking it before we started. There were a few kinks to work out, but all in all it was well done.

We moved on to Act II, and Ms. Munro had the girls who had done the parts of the missing girls this weekend be the ones to do them for rehearsal so that it was someone who was familiar with the part. I tried to stuff my panic and tell myself that I had this. That I knew what I was doing and was capable. That I could push through.

The Act started off really strong. I went the right way and stayed behind the correct people. We got to this part where there are three different sections, each with alternating directions of similar steps. The section I was part of this time has four girls in a front line and two in a back line. This whole time I thought that two of the girls in the front line went one way and the other two a different. So I’m going to town, doin’ my thing, when I hear my friend next to me whispering the steps.
Oh.
Oops.
I asked the girl I was filling in for after rehearsal and we laughed about it. Oh well, now I know. If I do this part again, I’ll make sure to go over it with the other girls beforehand so I know the correct thing.

We got to the part where she has a duet with another girl. The steps themselves aren’t excruciatingly difficult, but they are slow and controlled and technical. It’s also loaded with releves, which I struggle with as it is. I told myself I could do this, and I’m giving it my all, when my calf decides it is the perfect time to cramp up and I can’t seem to get onto my box to save my life. I try to press on, try to keep time with the girl next to me, try to tell myself I’ll do better the second time around. It was such a hot mess. Probably the worst I’ve ever done it. And I can tell myself, “It’s okay, you’re a cover” but if something happened and I ended up in this spot for a role, the audience wouldn’t know that. They would think this is what we have to offer. And the girl who’s roll I’m covering is such an insanely gorgeous dancer. Trying to do it justice is nearly impossible in comparison.

I tried to just press on and shake it off. (Hey, Taylor Swift.) I was taking deep breaths as we stood in this line, trying to remain calm. We were standing on the leg that had the cramp, and I knew I couldn’t fidget, so I did my best to just press through. My calf and arch were hurting so badly, it was all I could do to not move. I tried to distract myself like our teacher said on Monday  and started thinking about the details of the stars in the night sky to take my mind off of it. I made it, and when we were in our ending pose and me and the other girl from the duet are standing in releve in back with our arms in first arabesque, we subtly laced our fingers to help support each other to stay en pointe for the entire time.

I also ended up messing up this one part I always seem to screw up. I was disappointed in myself, but just made a mental note to work on it. I tried doing better with the runs, but I don’t know that it came off as any better.

We moved on to Act III where I have more of a character part. We changed a bit of the blocking, which helped us a ton, and went for it. As Mia, that night’s Black Swan, rehearsed, I studied the way she runs. So much so I let my face break out of character cause I was so focused on figuring it out and trying to apply it to my own runs.

They had whoever did Act IV this weekend do it last night as well, so I was out for swans. I was super grateful but at the same time wished I could have done it. There’s this one part I’ve never done en pointe and I really wanted to try it. But it’s okay. I was proud of the girl who did do it, she’s grown so much throughout this show.

I don’t think I have ever actually felt my muscles so much after a show. I planned to take my foam roller to work with me to have at the show, but went off and forgot it. I did, however, remember my nude leotard. So that’s a win.

Thankfully, my boss has a foam roller at work, so I’ve been going to town on my muscles here. I hope I have my foot roller in my bag because my arches are screaming.

Today is another day and another rehearsal. Some of it will be in costume, though I am not sure how much of it. we’ll go with the flow of it and I’m sure it’ll be a great rehearsal.

I’m looking forward to sleeping on Saturday before we have the show. It’s gonna be glorious. 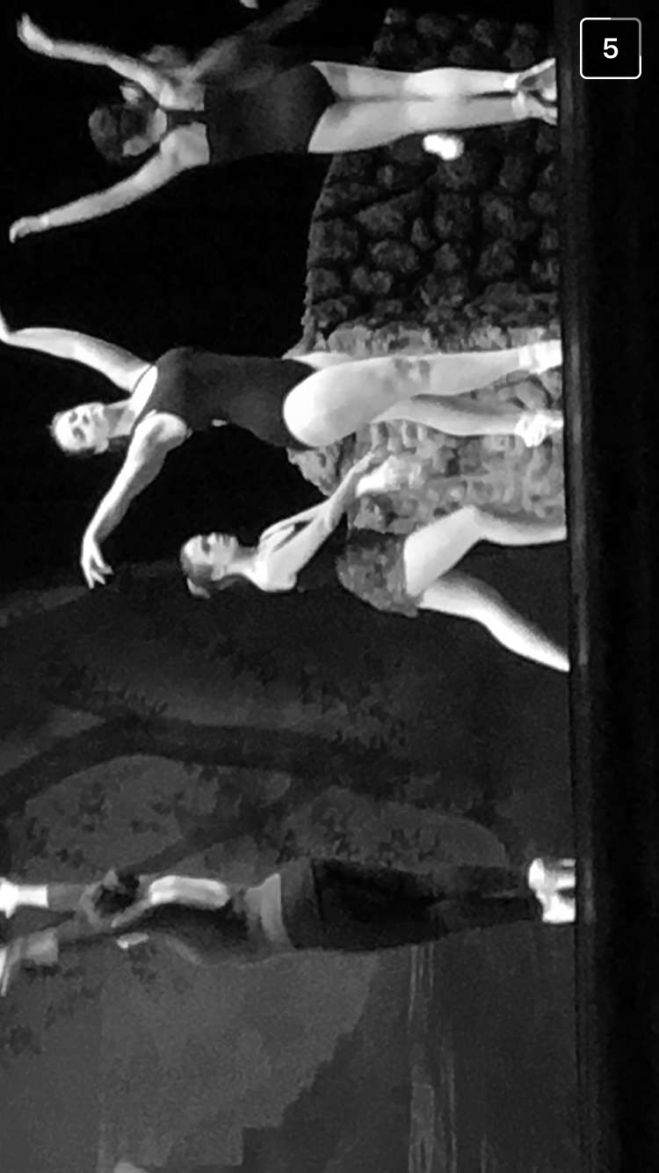 Here’s when I realized I was wrong. Hahahahaha

Before my calf cramped up. Like. This leads into the duet thingy.

(Sorry those are sideways. Couldn’t figure out how to flip them. I also didn’t try too hard.)

Standing with my friends. Arch dying. I made it.

Thanks, Maddie, for getting so many great snaps of rehearsal!! I really appreciate it 😊