Yesterday we ran the full show in costume straight through.

I did Act I, then quick changed into Swan for Act II for Lauren’s part. After Act II I took my Hunts Woman costume upstairs. Ms Munro came upstairs and told me to have Hannah do Act IV swan. She had ran it more and it would work well. I agreed and asked her if my runs were any better. She said a little, and showed me how to do them and broke it down a little more for me. My friend Andie was in the audience and was able to tell me what the diff rbetween do was in me compared to everyone else that made me stick out in a bad way. So that helped too.

I had actually asked one of the other girls if I should ask Ms Munro if Hannah should do Act IV since she had run it so much and her ballet runs are so much better than mine so she would look better overall. This way, I didn’t have to, haha, so that was nice. I’m glad it worked out that way.
When I took the tape off my feet, it was a little more painful on the right one. I realized when I got home that a blister had formed right where the tape ends, half under and half not, so when I took the tape off it popped it. So that’s cute.

I got to the theatre this morning and Mrs Alex saw me and asked me how I was feeling. I told her I felt great. I had slept and my feet were good and I was good. She said, “I think we’re gonna keep it how it’s been. It worked really nicely that way.” I asked to make sure Hannah was doing school show and she said yes, and I said great and we went on our way. It was casual. Yet so profound.

And I’m so glad it’s not just me. That another cover also gets to feel this. Gets to also be a swan. Gets to wear the costume and feel the feelings and wear the headpiece and everything. I wish it could be all of us, but at least it’s more than just one.

Honestly, being in rehearsals really makes me feel what a privilege this is. How quick it can all be gone. How everything can change in an instance. How none of this was guaranteed to happen.

And I agree that splitting the two Acts between two people is better. It looks so much cleaner. It’s so good. This is good. I feel way less pressure which is nice.

I called my sister and told her to get tickets. I called my mom and told her. Then I called my dad to see if he wanted to come. He said, “Thats great! When is it?” And I told him and he said, “I definitely want to go! Looking forward to it!”

I almost cried. It means so much to me.

School show was fun, the kids are always so great. They marvel at you and hug you and take pictures with you and give high fives and think you’re the greatest thing in the world no matter what role you are. The diplomacy of everything goes away. It’s stripped down solely to the purity of why we all got into this in the first place.

One of the girls from the studio came up to me and hugged me. She was a monkey last year in our scene and this year she’s in the first Act. It made me so happy. Another one of the first Act girls took a picture with us. I said, “hey, I know you! I see you all during first Act!” Cause she’s in front of me before I go on. It was sweet.

We have rehearsal tonight. I’m excited. I hope my foot feels better but I think I can push through regardless. I kinda forget about it once I get going. So that’s good.

I decided in the stands when my legs are dying, to distract myself I’ll treat it like conjuring a patronus in Harry Potter. You have to think of your happiest memory, focus on it hard, to make the patronus charm work. So I focus on every detail of my happiest memory to keep from fidgeting. 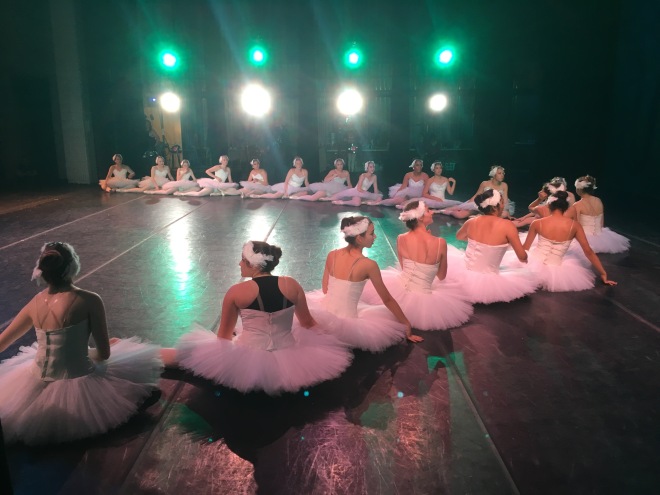