I really was terrible about blogging more than just a long, drawn out roundup at the end of each week. This makes me kind of sad, but at the same time I feel most of what I would say would be redundant.

I am glad to think back on my blog posts from my first Nutcracker and know they are more detailed and more frequent. It was a new world and I experienced it for the first time full of wonder. But now I’m a seasoned veteran, or whatever, and some of the details have become routine. (Though I still find myself staring up at the vast ceiling backstage, and getting chills looking into the audience.)

Hopefully I’m not too redundant in this post, the two weekends have already begun to blend and I can’t seem to remember what I’ve actually written and what I’ve merely thought of writing. If I repeat, my apologies.

We didn’t have rehearsal last week until Friday. Our Cavalier came in that week and worked in the mornings with our Sugar Plums, but the majority of us didn’t have to come in until the weekend. He’s incredible, too. Everyone was super impressed.

Our company is in Corpus Christi, which if you keep up with the news (and it’s been reported all over, including viral facebook videos) you’ll know we’ve been the latest city to have struggles with contaminated water. There was a chemical that is used in asphalt leaked into the water system, so we managed to have a full water ban for four days, leading up into the weekend. It posed quite the problem. Grocery stores sold out of water clear up to an hour’s drive away in all directions, with other cities and even states (shout out to Tennessee, who sent us water, even though they were the victims of insane wild fires) shipping water to help us out. I live outside the city, so thankfully I could shower and wash laundry and dishes and cook and anything else, but I was one of the few. Most of the few of us opened our homes to other dancers and friends to use our water until it got figured out. One of the dancers had to go to Houston for a dr appointment, left early because of the ban, and came back with cases and cases of water for the cast. Bless.

We managed to keep most sickness at bay, though a few dancers got hit hard on rehearsal days. They managed to make it through the shows, though, which was super impressive. One of the guys even made a daily ritual of handing out vitamin C cough drops during barre warm up. Take no risks.

I tried my best to be rested and hydrated so I could be at my top for this weekend, specifically for Saturday’s run of Snow. I flubbed a bit up in rehearsal Friday which made me so mad, so I ran over it a bunch before show. And, of course, I managed to still mess up anyway, although it wasn’t the part I was messing up. It was the part before. And it wasn’t a huuuuge mess up, but still I was pretty disappointed in myself. Especially because I know I can do it. I was frustrated because I don’t know what I was doing to keep causing me to mess up. I usually don’t have this problem. Like in Flowers, I have no problem there. I messed up a few things at the beginning, got corrected, fixed it. Bam. Why was Snow so different?
Ugh.

I also managed to actually fully kill my pointe shoes for the first time ever. I usually merely kill the shank before they become useless to me, but this time I actually softened the box! I was so proud, and nervous at the same time, as it happened in the middle of all the bourrees of Flowers on Saturday, and I still had one more show on Sunday to squeeze out of them.

My whole body was in pain like I’ve never felt before by the end of the night. I don’t know what I did more that day that I don’t usually do to cause it, but dang. I know I still hadn’t caught up from all the lost sleep the week before, but seriously, it was ridiculous. I slept so hard that I woke up with this intense knot in my shoulder. I wore out four friends trying to rub it out before the show. Mrs. Julie, who is directing our spring show, did our warm up yesterday. I loved it, and not just because she played the greatest Christmas song ever to be written. (“Merry Christmas, Happy Holidays” by N*SYNC, of course) but because she does combinations that are simple, but warm us up quickly and effectively. I was grateful to only be Lilac, it made me feel way less pressure. Plus, Lilac is my favorite role I’ve ever danced. I knew I could just enjoy it.

I got pictures of the Clara’s this weekend as well, and helped with the Rat Queen’s props, which made me feel really good. I appreciate getting to be able to help.

Backstage shenanigans are my favorite. Just being surrounded by dancing and dancers, in incredible costumes with pointe shoes (or, more often, super fluffy socks) on my feet. The lights and the sounds of it all. The pointe shoe army on the stairs, the ominous smell of hairspray every where you go, every detail that comes along with it. This year, i was even dubbed the barre master. (Because i often helped get them out and apparently it was evident that I had theatre training cause I knew what I was doing. Hahaha)

My parents came to watch me this year, as well as some dear and cherished friends. One of my friends I’ve known since we were toddlers. She recently moved back home when the Marines transferred her husband back here, which is unheard of, but I’m not complaining! She’s been gone most of the time I’ve been dancing, and was able to see me dance for the first time. It’s so cool having friends like her and others who support me in the things I love.

Our cast party got cancelled, due to the water ban, but a few of us went out to dinner after the last show, which was tons of fun.

It’s fun to hear what people who aren’t in ballet think of everything. My friend who came Sunday was telling me he even noticed how our Cavalier would spot the four corners as he turned and how impressive it was. It’s also fun to hear all the different people’s favorites and how much they vary. It really makes you feel like you’re part of something big and that you’re important. I love it.

I also had kids take pictures with me, a few even asked for autographs. And I’m not really anything big and impressive, (though my costume is LEGIT) but sometimes you can forget that to the audience, that doesn’t matter. You’re on that stage. You’re in the shoes. You’re living the dream others are only dreaming. You got out there, put the work in, and are now reaping the rewards.

Seasons come and go, things change year after year, and now we’re staring down the barrel of the beginning of a new year entirely, further proving that. Who knows what 2017 will hold; who knew 2016 would hold what it did? We can only move confidently in the direction of where our hearts lead us and take things as they come, knowing each new day becomes part of the bigger stories of our lives.

Make it one worth reading.

And now, some pictures! 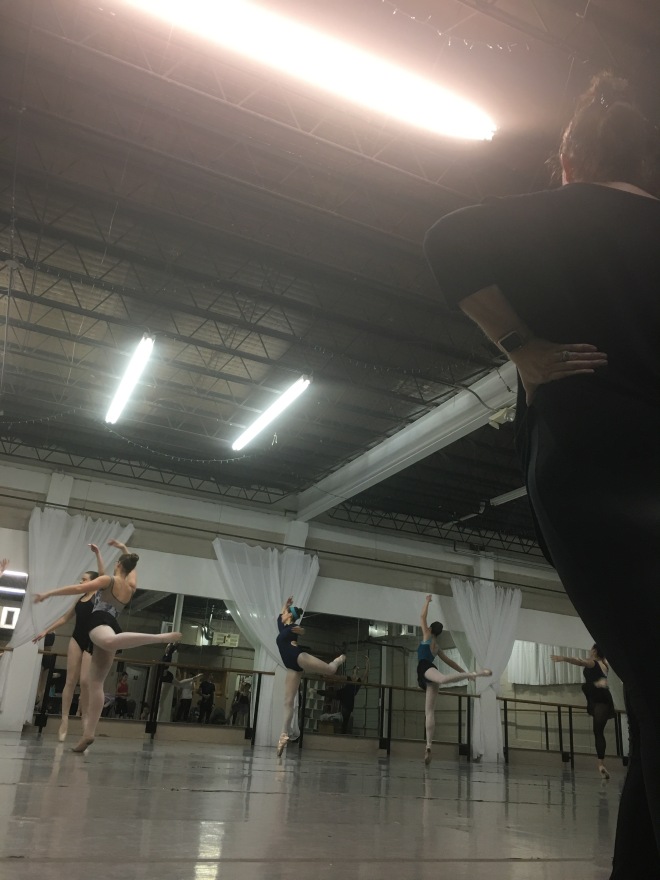 New skirt from FlicFlacDance on Etsy! I’ll link it here once I get a chance. Stay tuned. 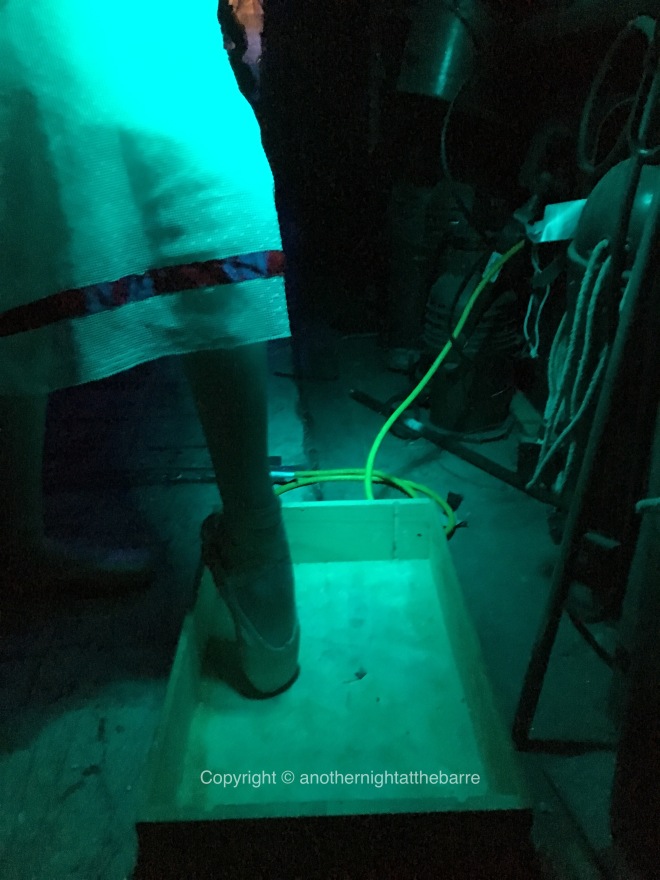 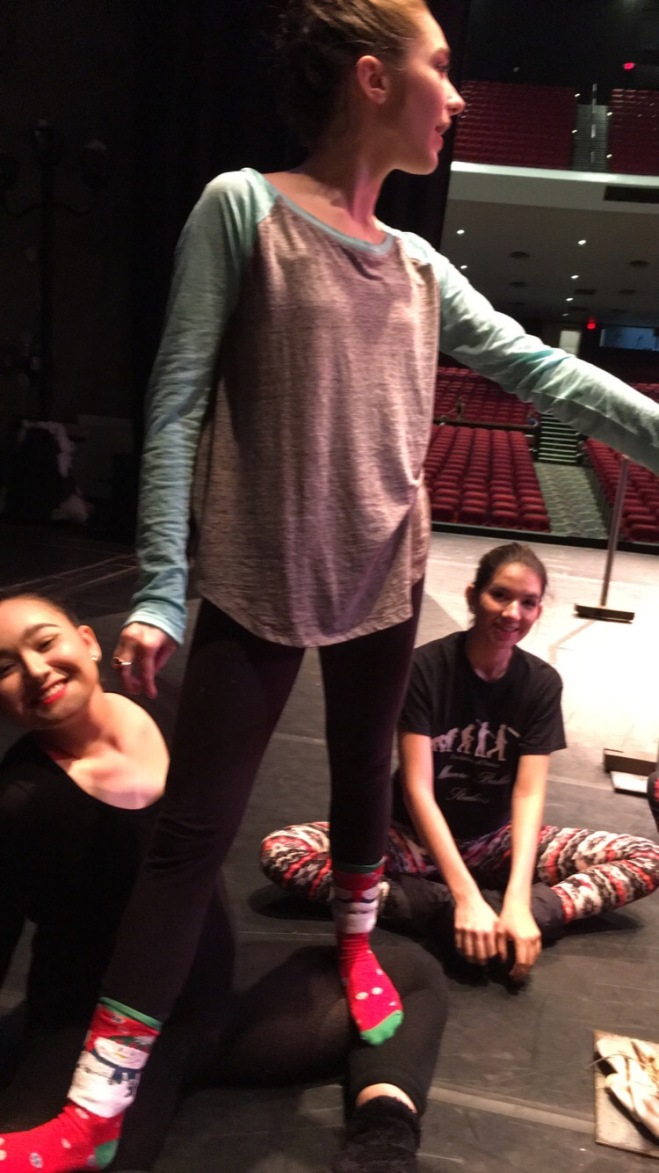 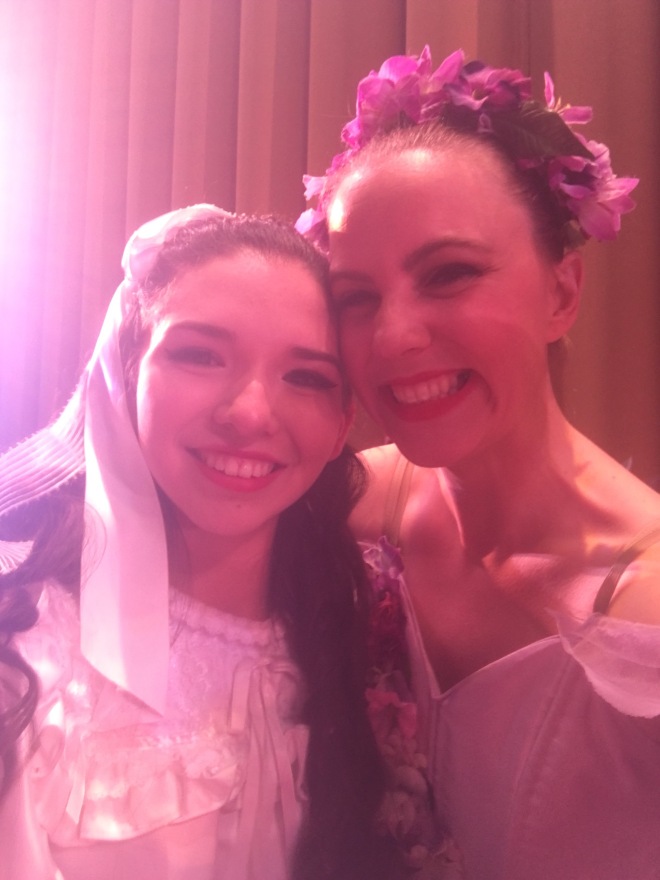 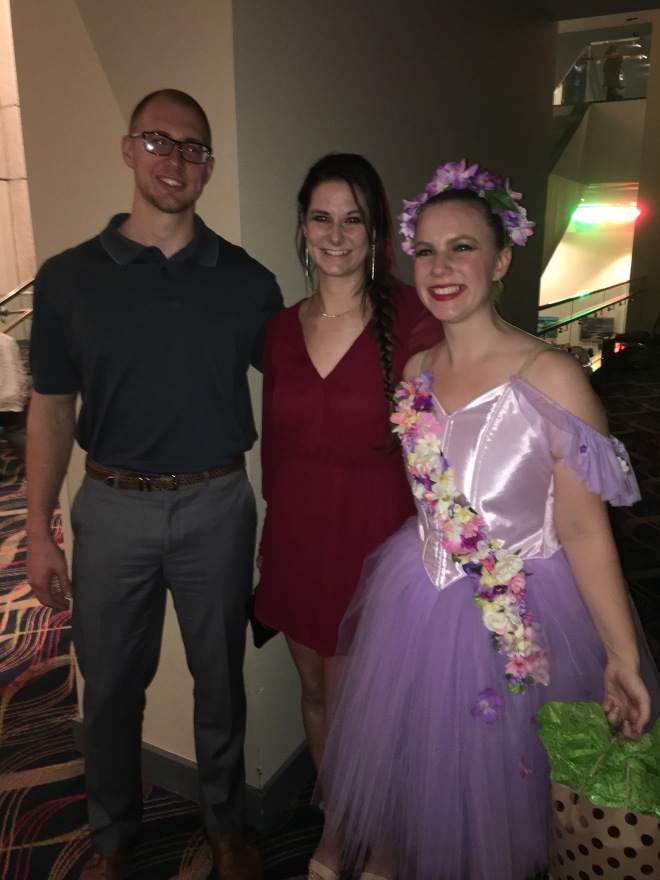 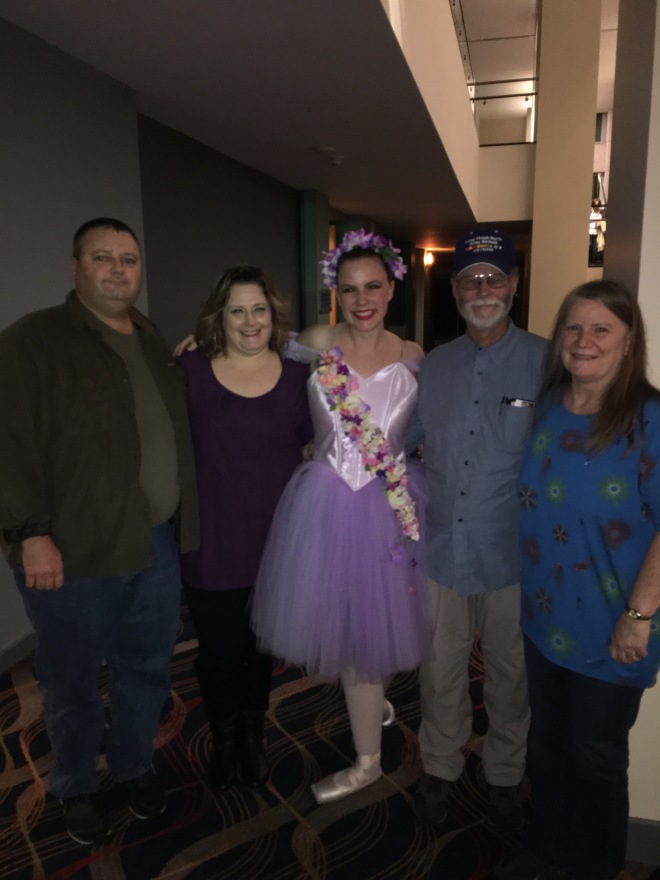 My cousins on the left and parents on the right ❤ 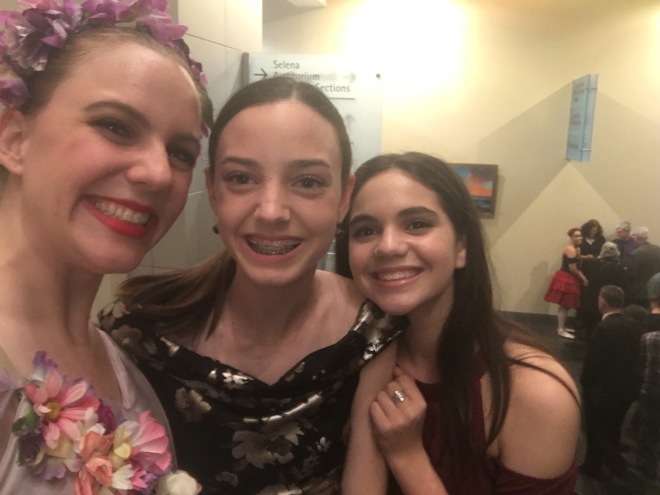 SO many graduating seniors this year 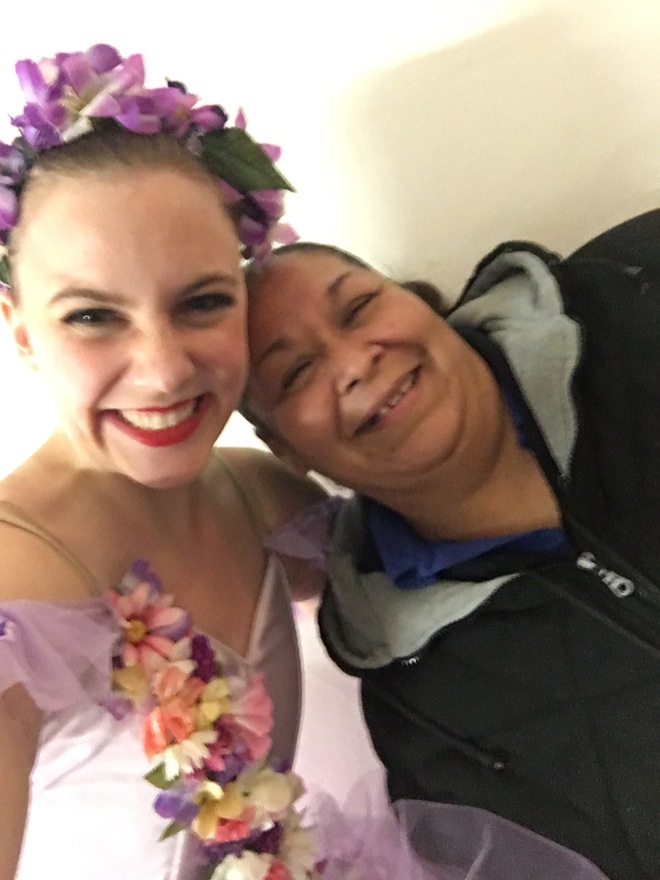