This week was our first week back at the studio since Christmas break.

Honestly, I was nervous. I quickly got used to having my evenings and weekends far more free than than they are during the dance season. Balancing everything is a big struggle for me, but I really don’t want to cut out anymore than I’ve already had to, and the cuts have been extensive. But that’s a big downer so I won’t get into it in this post.

I was nervous about my Wednesday class. They haven’t gotten into a groove like last years class did and I found it rather disheartening. Wednesday’s class only had 9 kids (out of 16) but it was an absolute dream. It was the most focused I have ever seen them, which really helped us get through more things than usual. I hadn’t choreographed their dance yet, so I was able to try things on them in order to know what they’re capable of and get their dance knocked out today. It made me so happy, and I hope it set a tone for the rest of the semester. We’ll see how it goes when everyone is back in class.

Fridays class was a bit more complex. I forgot that I had gotten so many new kids, and they weren’t having it at all. It’s was beyond frustrating. They wouldn’t focus and didn’t seem to care to be there at all. I wanted to be like, okay cool bye, but you can’t really do that. I’ll just have to prepare more with that in mind and take away the special things they were getting since the class started out so wonderfully. Now it’s causing too much of a distraction. Their recital is done and if they’re going to be able to do it, it’s going to take a lot of work.

Obviously, I can’t expect every class to be perfect, but it takes more energy than I have when they don’t focus in class.

I have my assistants back, which is so stinking wonderful except for Saturday’s. Found out they had rehearsal, so I scrambled to find a solution. Thankfully, one of my assistants little sisters has been helping out during the week, so I asked her mom if she could help on Saturdays and she was totally on board. I also had another friend who is in the older class but not in the rehearsals help with my 6-8 year olds. It was an answer to prayer, honestly. Work is already intense and I’m feeling the strain and it’s only January. If I’m going to endure the next five months, I have to pace myself and use all the help I can get.

My 6-8 year olds were so great today it gave my heart so much hope. I started working with them on their recital dance, and the feedback I got was so wonderful. They’re excited and I really think it’s going to be great. Once again, half the class wasn’t there, but it made it to where we were able to get more done. I was able to sort of work out the bumps in the piece and should be able to have it all set for next week. Hopefully more of the kids will be there so we can get rolling with the dance.

My 3-4 year old class had two new girls, one of whom didn’t speak English. She was super precious, though, and kept up really well. I’m excited for her. I was extra glad to have the help I had today since I had 11 kids, and it wasn’t even all of them. They remained relatively focused, which was impressive, and we were able to get through quite a bit. One of the little ones asked me to tie her shoe, as often happens. She asked me if they were going to have a costume for recital. I told her yes. She asked if they were going to have a dance, and i told her yes, that i was going to put it together for them. That they would learn it and perform in May and be beautiful. She said, “thank you so much! You’re the best teacher ever!” And gave me a huge hug.

It’s moments like that that remind you why you love doing this. Moments like that are worth the added exhaustion that comes so easily these days. It’s worth taking the tiny baby classes no one else seems to favor. The kids are so sweet and they love love. It does so much gold for your soul.

This is only my second year doing recital dances. I still get rather nervous and intimidated. I want my pieces to do justice. I want the dancers to look good, but also for it not to be too easy and lame.

Last year I employed the help of a couple friends, one also being my assistant. It helped me to have someone to bounce ideas off of and to brainstorm with when I knew what shape I wanted but couldn’t figure out what step. We were able to churn my three dances out in a matter of an hour and a half.

This year is quite different. I have an older class, which means it’s more of a challenge. It’s the age where you want to start doing more movement with them on stage, which takes more brain power.

I decided to start with my most complex dance and work my way down. That way, if I didn’t get to them all, it would be easier to get done the ones I would have left. My 6-8 year olds are dancing to “Once Upon a December” from Anastasia, and I’m so obsessed with it. The class today really made me so hopeful that this dance will look good and make the girls feel good, instead of looking like a sad attempt at something cool. We make some fun shapes and work our way around the stage. So far I’ve only just done it in my room, and really just marking it, so hopefully it works out when it’s all put together.

This level is still pretty new to me, so to open my mind to new ideas of what I should incorporate and what is age appropriate without making it too complex or too simple, I employed the help of YouTube. There were some really great pieces on there that were realistic and also made the girls look good. I took some notes from about 5 or so different videos (after watching many more than that) and then put the version of the song we’re using in repeat. I closed my eyes and tried to get a visual of the song. Showing the bits to the girls today really made me hopeful.

This is the costume they’ll be wearing

Which I absolutely love. I’m so excited.

I did some fine tuning to the dance after class today, and also got my Wednesday 5/6 year old class piece done. I found that one a little more difficult since I went from more complex to less complex. It’s also part of why I took some time in between before trying to get it done. I wanted to see the girls, get a feel for the class again, and then take it fresh. They’ll be wearing this costume

And dancing to a song called “The Axiom” from Wall-e. They’re going to be so precious. I’m excited. 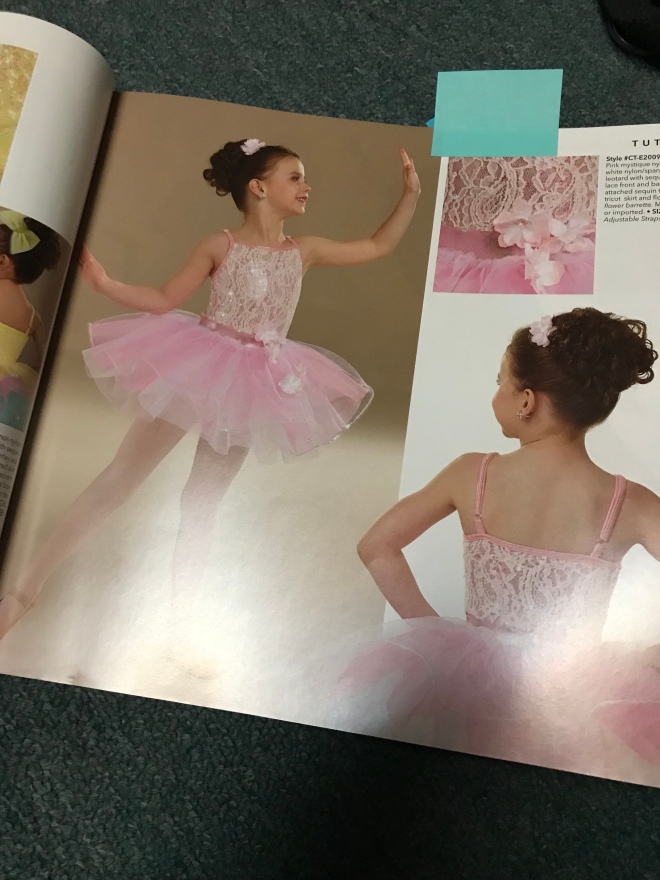 I haven’t done their piece yet, since I don’t start the young ones as early. This is a good thing, considering I got the two new ones today, but I still want to get it choreographed soon so it’ll be on paper and one less thing to do.

Another, more subliminal, reason I do them early like this is in case anything happens to me, whoever would take over the class would have good notes on the piece, and hopefully the girls would see it enough time to be able to guide them through it. I would hope this doesn’t happen, but each year I seem to get a little worse and I don’t want to take any chances.

I’m already getting overtime at work and the new year has hardly begun. My hope is to be able to stay on top of things there–January is my most difficult month, which things being tense and stressful through May. (If you don’t know, I do taxes. I also live in an area effected by Hurricane Harvey which threw us off majorly.) Between working 40+ hours a week, teaching four ballet classes, (with an 80 minute commute) chiropractor appointments every other week, all while being chronically ill (and for reasons doctors still can’t explain) it’s quite a bit to handle. Not to mention the fact I live alone, and therefore have to handle all household everything myself. It’s exhausting. Every free moment is spent lying down to try and save up any and every extra bit of energy, because I already needed it weeks ago.

Pray for me, y’all. I’m determined, but this won’t be easy.

Still, I’m very happy to be able to have these classes and teach these students. I’m grateful for the overtime to hopefully get all my medical stuff paid off. That’s my main goal this season. I have a good life. Maybe one day I won’t be sick and I can get back to actually dancing myself. Until then, I’ll take what I can get.

Hope y’all are doing really well. Thank you again, so much, to you who have been encouraging me, whether it’s here or on instagram. I appreciate it more than I have words to express and you often bring me to tears with your kindness. I hope you feel the same kindness in your life. You clearly deserve it.