Last Saturday was the auditions for our company’s spring show. This year we’re doing Giselle, which I’ve never seen. I’m really excited about it.

Because it was auditions, I was left with no assistants. Normally this isn’t more than a minor inconvenience, but as the days go on it gets a little more problematic. (Me being the problem.)

The classes went great. My older girls really love to be there, which is so very exciting. I don’t ever have everyone there, so it’s making recital difficult, especially for the ones that have been missing class since catching up will be difficult. I’m not going to worry until I have reason to, though.

I got two new girls in class, sisters. They’ve danced there before but hadn’t been in a while. They held their own really nicely and I so appreciated the older sister’s work ethic. Home girl gets it, and it’s a joy to witness.

One of my dancers came up to me at the beginning of class and handed me two thin mint cookies. She said, “You get two, because you’re the teacher.” Obviously, this made everyone else ask her for one as well, but I said, “Nope! I’m the teacher, I win, go back to the barre.” and it was just a funny moment. You may not care, but I write it hear because I want to remember it.

Many of my 3-4 year olds were missing, which actually ended up working out quite well since I was alone. Bending over to tie ballet shoes makes me dizzy, and having the smaller number made it easier to keep them all in line. They’re really good kids, too, so I typically don’t have much of an issue with them, but herding 9 cats instead of 15 was nice.

The teacher for the class in between mine got caught in traffic on the way, so I took roll and started doing some stretches with them until she got there. I’m not sure if it was that or if it was the strain of the classes themselves that did it, but by the end of teaching I noticed a new pain on the right side of my lower back, as well as moments of numbness. So far, I haven’t had numbness from the bulging-disk-hitting-nerves thing yet, and this wasn’t numbness over the entire leg. It was in sections; part on my lower back, part on my hip, and part on my inner thigh. I found this odd, and asked my chiropractor about it on Tuesday. He showed me a diagram of what parts of the body are affected by the nerves being hit, and it made sense. We’re watching it to see if it progresses or mellows out before we get too concerned. I just really don’t want to end up with permanent nerve damage.

When I first began dancing and fought through all the things that tried to hold me back, I remember saying I could keep dancing even if they had to cut off my legs. I’d find a way to work with a prosthetic to at least do some bits. I never thought the thing to plague me would be fatigue, keeping me from having the energy to attend class, and now the (in worst case, dramatic scenario) the thought of “what if I end up with paralysis?” Obviously, that’s not where I am now, and obviously, we are doing our best to avoid that, but still. The fact it’s even a slim possibility can make you nervous.

Now I’m going through different ways I can alter my teaching to put even less stress on my body. (Doing Soute’s makes the numb feeling come back.) Hopefully it’ll work and I won’t have issues, because even having the most incredible assistants ever, I don’t like not being able to show the kids myself how to do things. But we’ll work with what we’ve got.

Last night, I had a new girl in my 5-6 year old class, so I spent a little extra time going over terms of steps we’re learning and the specifications with them. When I asked what shape your legs are supposed to make in a plie, they all shout back, “a diamond!” Then you hear this one little voice say, “Actually, I’m gonna call it a rhombus.” I looked at Kara, my assistant, and we both laughed because it was the greatest thing. Things like that truly make my day.

I love that ballet is part of my story, even if it isn’t as much of the plot as it used to be. I’m grateful for the little moments I do still get and am hopeful that this isn’t all for me. Just because things seem to be in a constant, albeit subtle, decline doesn’t mean they’ll always be that way. 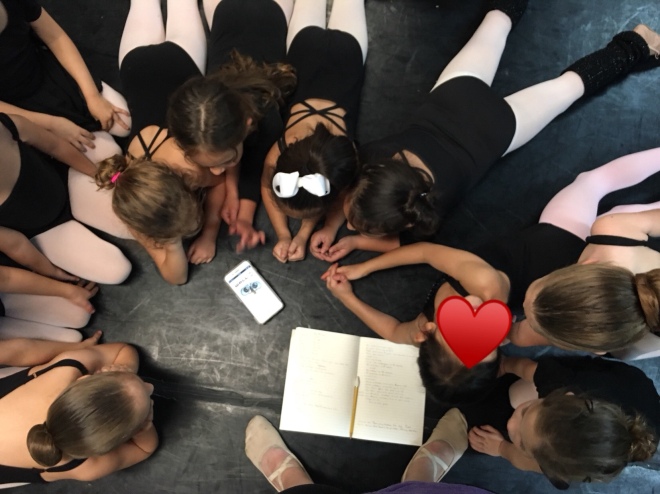