I was pleased to find that work hasn’t been crazy enough this week to cause me to miss classes. I thought it would have kicked in already, but so far so good. This means I would only miss three weeks tops. Hopefully I can make at least one class even on the worst weeks, but we’ll see. If all else fails, I’ll do stuff at home. It’s just better in the studio.

Barre felt so good in class yesterday. Like when you are super dehydrated and drink a cold glass of water. Crazy that I had only gone a week without class, but also factor in the intense rehearsal we had the day before and it makes a bit more sense.

When we got to center for pointe, my feet felt like they hadn’t even left the shoes. Like they had had no rest since the last time they, even though it had been over 24 hours. It limited me a bit on how much I could do since the pain was pretty intense, but I tried anyway.

And that’s the difference; I tried. Usually I would panic and freak myself out before I could even give myself a shot at the movements, but even though some of them were new and scary, I tried. I largely did not succeed, but that is okay. It’s one step closer to one day succeeding. It also alleviates many mental blocks that could form from fear I let creep in and tell me I can’t do it. And in trying I could tell that had my feet not felt like death, I would have been more successful. I left feeling empowered, not defeated. And that makes all the difference.

I also noticed one of the girls in our class. I first met her last year when she was on the fours class recital with us. She was a 3/4 and I was a 4/5. This past year they let her go ahead and come on to the 5s. I was very proud of her. She had been working really hard, taking private lessons, and doing everything she could to work harder. Not just from last year, not just from the start of this season, but even since swan lake, I have noticed a vast improvement in her. Like something just decided to click. Where she used to just give a really good effort but still come up just short, now she gives really good effort and attains. The details are smoothing out and becoming more defined. And yesterday as I watched her in the second group of a combination, I watched her successfully hit all the turns we usually find difficult, and keep up with the movement and do it all the right way. I watched her succeed, and I’ll be damned if she’s not becoming a force to be reckoned with.

I was so grateful for the reminder she gave me that hard work matters, that it does pay off, and that attitude and determination are truly everything.

Not to mention, she’s one of my fellow Ugly Ducklings, and that makes me even more proud.

I’m excited for today’s class. I’m hopeful in my abilities and that it will go well. What’s more, I’m eager to come alive.
Side note. I bought a platter tutu on a whim and it came in and I’m SO excited. 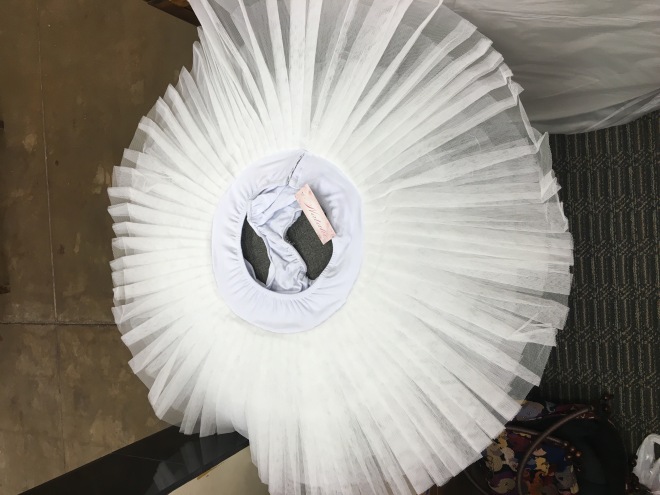