I find it ironic that the song low key in my head this last week just started playing when I started writing this.

Last night was our first show of Swan Lake!

I ended up getting there super early, but he door was already open, so it was really convenient. Usually we have a bit of time after warm up to finish make up and stuff, but Ms Munro wanted to run Act II for those of us who were newly into the role. We greatly appreciated it, let me tell you.

Since I was there early, I was able to get my hair and stage make up done easily. There are six of us assigned to the one dressing room I’m in, which could maybe comfortably fit three or four, so being able to really have time to breathe, spread out, and not rush was really nice.

One of our teachers, Brian, did our warm up. I really love when he does them because he gives us things simple on the brain but that are very effective. He’s also really funny in the theatre surrounding, and for some reason I tend to do my best turns at the theatre. It was his last time leading warm up with us as he’s moving, so that was really sad. He always uses fun, new music, and this time he threw in a little Prince as well.

There was a man with a video camera filming parts of our warm up. No one seems to know who he was, though. At first we thought maybe from one of the news crews but we didn’t seem to see anything from them. There was a point when I was finishing turns and he had that thing pointed right at me, Ms Munro smiling behind him. Talk about nervous.

We finished and ran swans and then went to get ready.

I had gotten a text from my co worker saying that she and my boss were coming to see me! I don’t know what I did to work at a place so wonderful, but I greatly appreciate them. I was so excited! They’ve been so supportive this entire journey, even though they’ve had a family member in the hospital.

I also had a friend from my old studio I used to take classes with who came with her mom and sister. (We got our pointe shoes at the same time 😊) Her other sister is in Act I with me, and I love her so dearly.

There were two of my fellow adult dancers there last night as well, from my old studio. Two of my biggest supporters and biggest fans.

Also my co worker from my old job came down from Houston to see me. I hadn’t seen her since about October and she was the first to buy a ticket from me. 😊

There were also my friends from the other ballet company in town, Corpus Christi Concert Ballet, who were in the audience, my dear Frances and Clara. I met them in September at the dance festival my old teacher helps put on at our local university, Bailando Dance Festival.

Plus my friend from a local young adults ministry, whom just recently got back into dance herself! I’m really proud of her and she came to see the show as well! 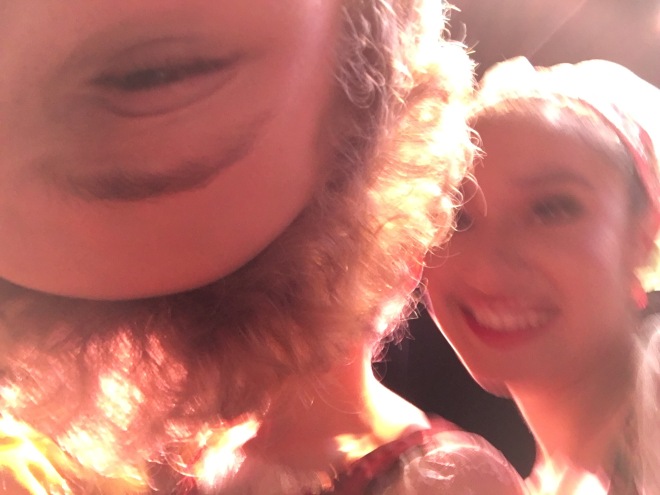 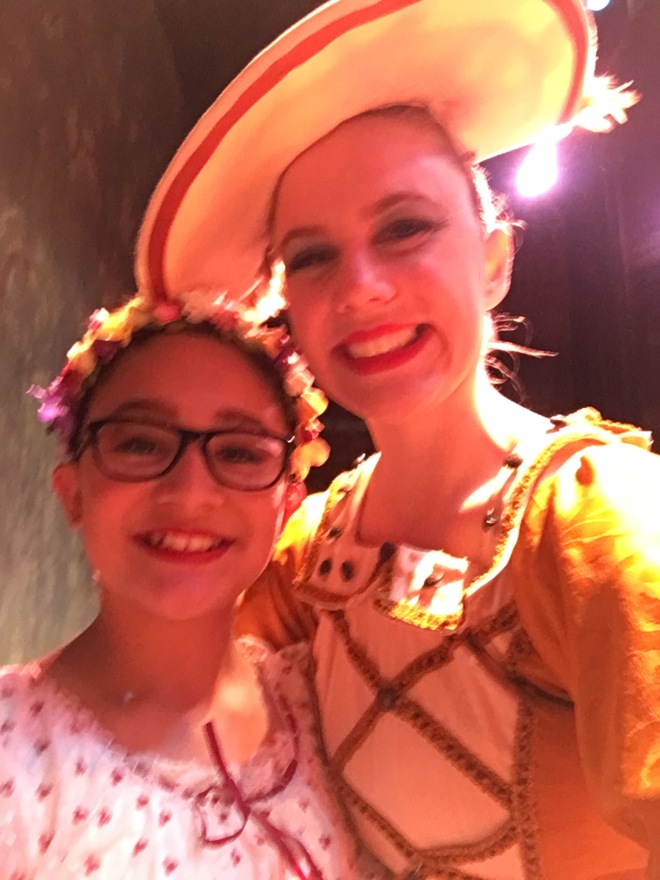 I realized I hardly had any pictures with my friends, so I had to change that. Here are a few before curtain with some people I love 😊 I still need to get more. Hopefully that happens today!

When the overture started playing and Rothbart and the Swan Queen were in place, it started feeling real. The lights came down, the scrim went up, and we all got into place. Lights came up, and it was a go!

We had a blast. Hunts Woman is a really fun and light hearted role, mixed with the great costumes and incredible hats, the whole thing was fabulous. I really like my costume, too. It makes me feel like I’m being someone I would never really get to be in life due to just time. It’s one of my favorite things about theatre–you live a thousand lives.

Act I ended and we rushed to quick change for Act II swans. This is when I really felt the nerves. Backstage, we all pumped each other up and encouraged each other. I told myself that I was gonna do great. That I was going to remember every step and placement and was going to run correctly and wasn’t going to flinch and it was going to be great.

The music started, and the swans started running on. This is my favorite part of the whole show–you can fee the unison with all of us and it’s just an incredible sight and feeling. To be part. To get to do this. I can’t describe it.

There were bits I messed up, but overall I feel I did well. I remembered the parts I usually mess up and didn’t feel like I had any spaced out moments. So that was nice. The finale was a little rough for me, but I’ll do better today.

I told my friend Abaranne how I would rearrange the letters in the Exit sign to form new words to help keep my mind off my calves burning and keep me from flinching. She told me she was going to give me an epic word to use. So she gave me xylophone, which I first had to figure out how to spell, haha! But during the one part that really hurts, I made a good 10-15 words, so it was beneficial. She’s giving me a new word today. Hehe

I feel like Adrienne did her best she’s done with the duet part she was given this week. I was very proud of her. I am at a good place to get to see most of it while still keeping my head in the correct position.

Act II ended, and we went into intermission. I asked Mrs Jane if it’s okay if I put my swan costume back on after to go out and greet everyone, and she said she didn’t see why not. I don’t have a head piece, as I share with Hannah, but that’s okay!

Act III is fun, especially since I get to wear a big, pretty dress. Once again, living a life I’ve always wanted to live, if even just for a moment. It’s like I’m fulfilling these little childhood dreams I never thought I’d be able to fulfill. It’s so much fun!

After Act III, I helped get the girls in one of the quick change rooms out of their costumes and into swans, just in the nick of time, then I headed upstairs to change back into swan. In the stillness and quiet of the dressing room, with only the Act IV music playing from the stage, it was a moment hard to describe. Like something out of a movie.

At one point in the dressing room before one of the Acts, the girls made a comment on how doing this show is such a once in a lifetime thing. And they’re right. Some dancers never get to do Swan Lake, and here we are, doing it. Here we are, as Swans.

We are living the dream.

I went backstage to watch the last bit of Act IV and it looked so good.

It’s funny that people think it is long, because being in it, it feels so short.

We all went out to meet people, where I got to see all my friends.

Here’s Sarah an Liz, my fellow adult dancers who are two of my biggest supporters. I love them so much. They are there for every up and down all along the way. 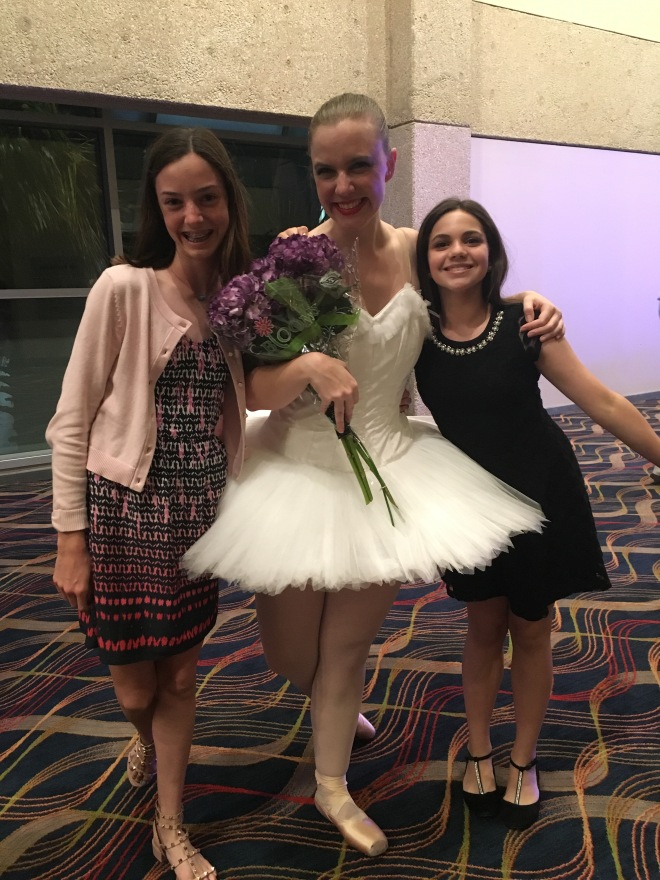 Here’s Frances and Clara, my sweet girls from Concert Ballet. They were both Clara in the Nutcracker this year and did a wonderful job! It’s so much fun to have friends who also dance and are so excited for you. It fills your heart with such joy that is difficult to describe. 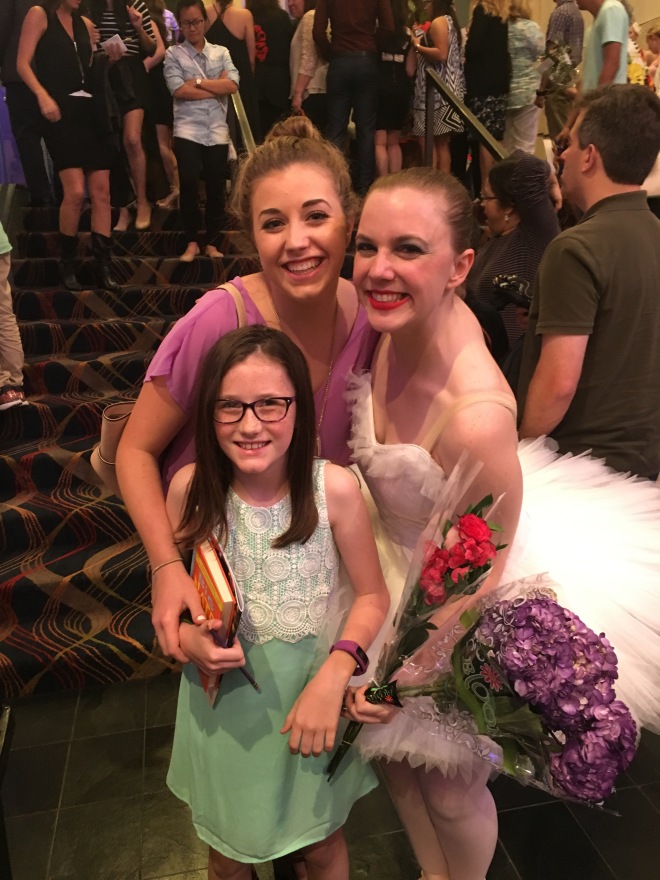 Here are my sweet Roberts girls. Hanna and I were in class together and got our pointe shoes together and now she’s in college and I miss her loads! Her sister, Clara, was a top notch tapper and has recently gotten into soccer and is super great at it! I love them so much. They saw me and we freaked out and Hanna told me how proud she was of me. And like, I knew she meant it. She’s been there the whole time (same with Sarah and Liz) and seen the struggles and knew me at the very beginning of this journey. Their mom was also there, and near about cried and hugged me so tightly. I love this family. So so much. They’ve been nothing but supportive. It really means the world. 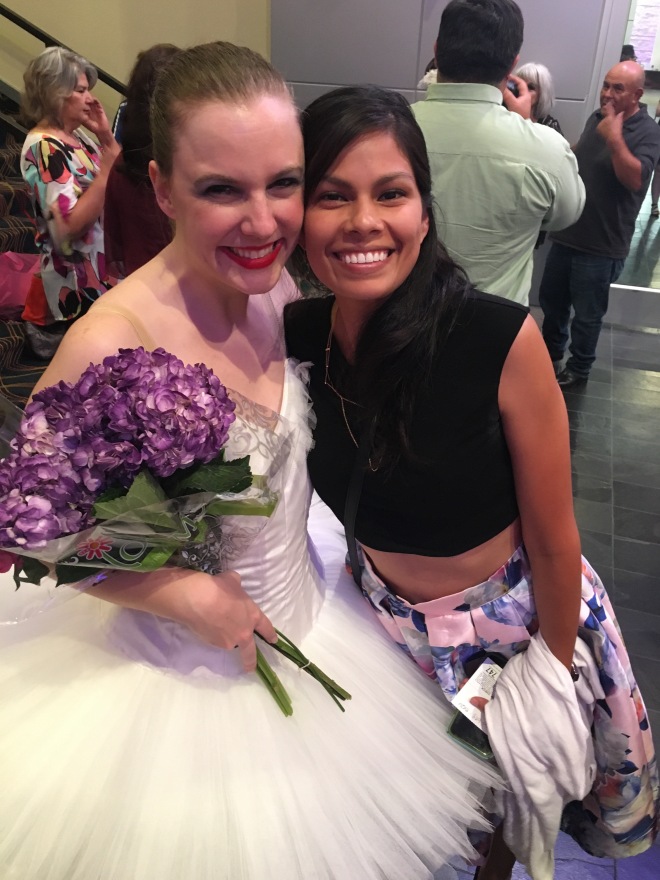 Here is my sweet Aimee. We used to work for the same company, which forms a bond no one can ever break or try to compare to. It means so much to me to have her in my life. 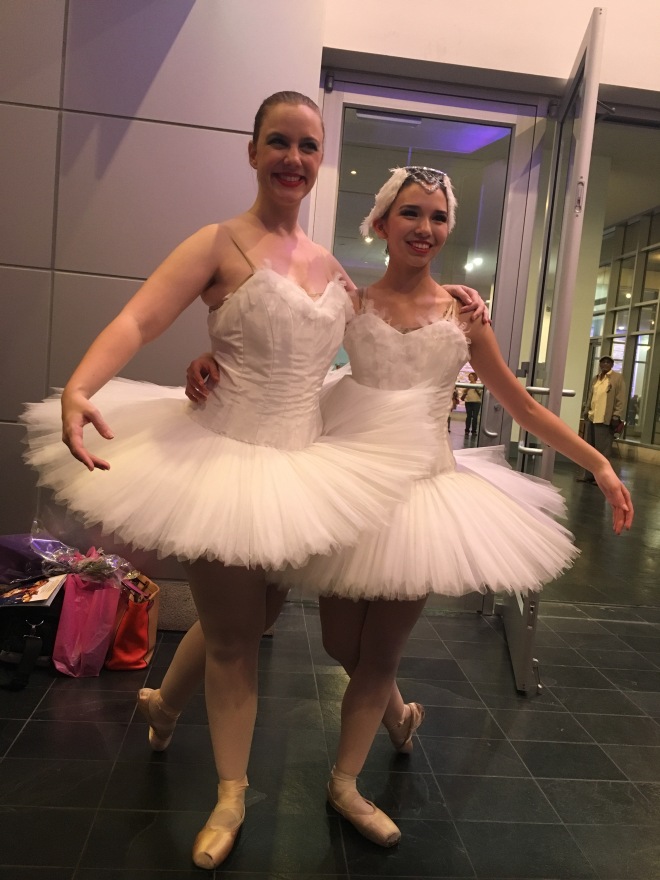 Here’s my dear Ileana. She and I have been in the same class since I started at Munro, and has been so supportive of me and super helpful this week. She even had a dream I became a swan, and look! I’m a swan!

Here I am with Ileana and Annika! Swan friends!!

This adorable couple found out about our show from the news cast Ms Munro did on our local tv station. They had everyone they could find sign the program, which is really really cool. They were super supportive and adorable.

Here’s my friend Mariah! She got back into dance this last year and I’m super proud of her! It’s so cool to hear how she perceives everything and remember where I started. She’s going to be in a dance production this Wednesday and I’m so excited for her! 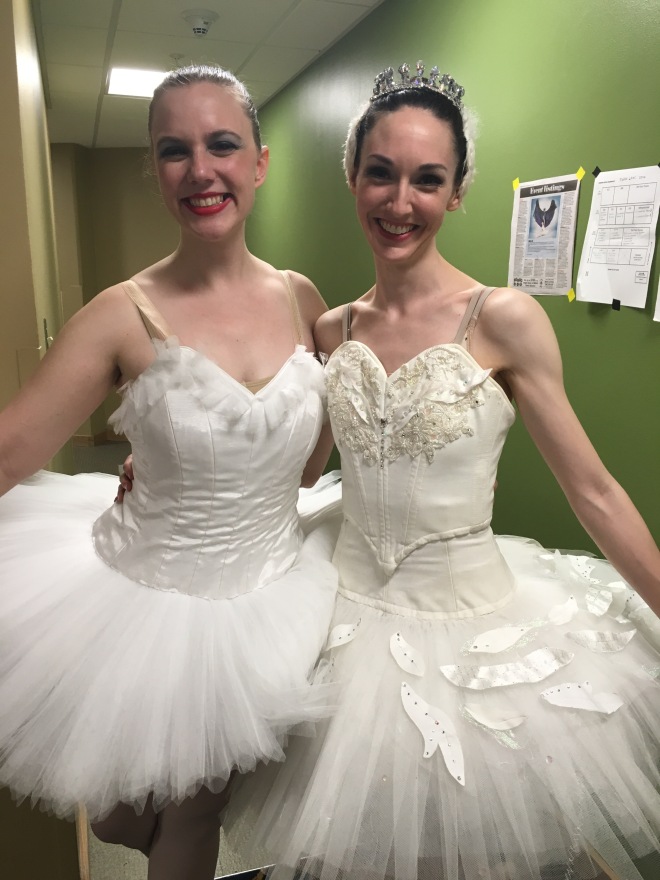 Here I am with my friend Elizabeth. She has been so supportive and kind to me since the day I met her, especially throughout Swan Lake. I’m really proud of her and all her hard work as Odette. She’s so talented and works so hard.

I hope to get more pictures with my friends tonight. They mean the world to me. And I’ll post a blog hopefully tonight about today’s show and also the little things I never want to forget about this show.

It’s been a whirlwind, but I’m really going to miss this show.