I just posted a super difficult blog post that I’ve been trying to write for a few months. I also thought about waiting until the summer to post it, but feel that now is the best time. The details are there, but essentially this is my last year teaching. I also won’t be active on this account anymore. It’ll remain live, as will my blog, but I won’t be checking in on it. This has been an extremely difficult decision to have to come to, but it’s one I can’t avoid anymore. If you’d like to keep up with me, please feel free to follow my personal account @emileeayers or my poetry account @forthestranger (or my “nerd” account if you’re into that, @thenerdjacket ) I love y’all so much and am super grateful for the friends I’ve made over the years through ballet. Super proud of y’all and everything you’re accomplishing every day. (Thanks to Mrs Gigi for this picture from nutcracker this year. It’s super special to me.)
I’ll have a proper post after the trip when I can blog. I’m the meantime, please enjoy this photo of @ballerinakay that I am properly obsessed with. ❤️
Two years ago today, I met @allie_on_pointe in person! In NINE DAYS we’re going to London together! I truly cherish the friends being in the dance world as an adult has given me. ❤️
Caught the train, heading back to hogwarts. See you witches (and wizards) there!
The dance season started up this week! My classes started today, and I wrote a blog post about it. Now I’m gonna go sleep. Link in bio
I was at a Harry Potter convention this weekend with my best friend and had an unexpected ballet encounter. I wrote about it if that’s your sort of thing. Link in the bio. 💛🖤

My family lives in Kansas near the Missouri border and my cousin is getting married tomorrow, so we drove up on Thursday (through terrible storms and tornado warnings) for this momentous occasion. 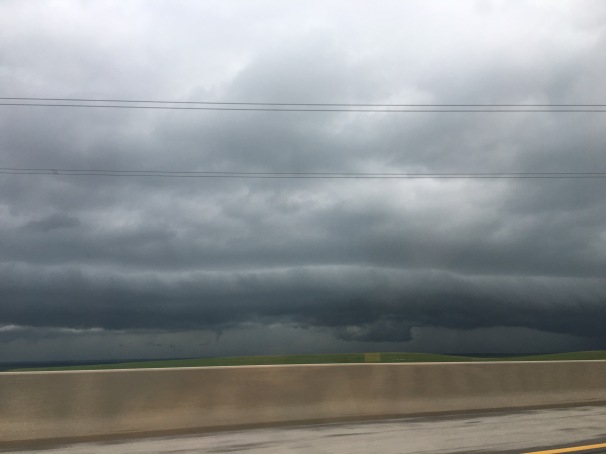 My sister and I planned to do a bit of shopping Friday since the outlet malls are literally a five minute drive from my aunts house. I had heard that Eleve, a dancewear company, had one shop and it was in downtown Kansas City, so I brought it up to her. I wasn’t 100% sure we would get to go, but she made it happen.

The website is really great about having details on how to get to their shop. They tell you the address, as well as where their parking lot is. There are signs showing you you’re in the right place, but even if there weren’t, the directions online are enough to get you there.

The store front is actually a furniture store of some kind, and Eleve is off to the back part on the side street. There’s a sign there instructing you to press the buzzer on the left and if it didn’t open the door to call them and someone would answer and let you in. 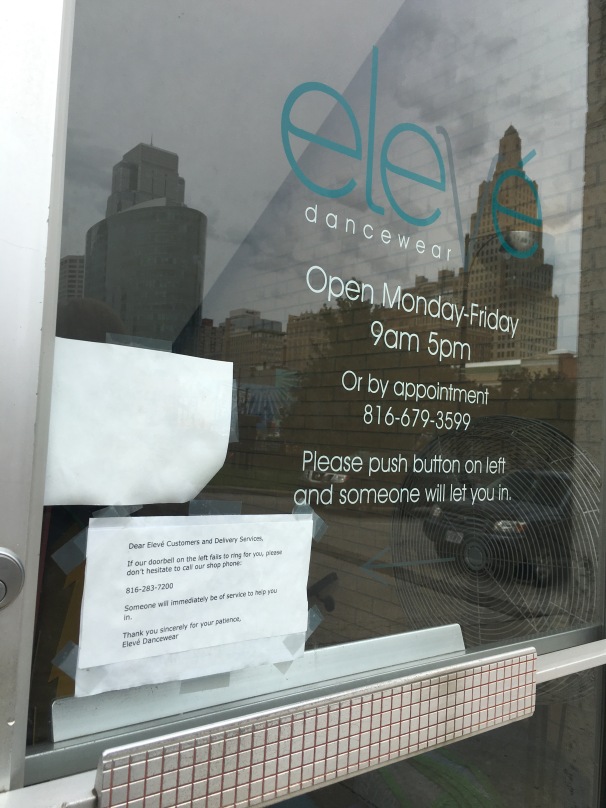 I pressed the buzzer. It didn’t work. So I called. They were really nice about helping us get in. You walk two flights of stairs (I guess it’s technically just one flight? Whatever.) and you come to this heavy metal door 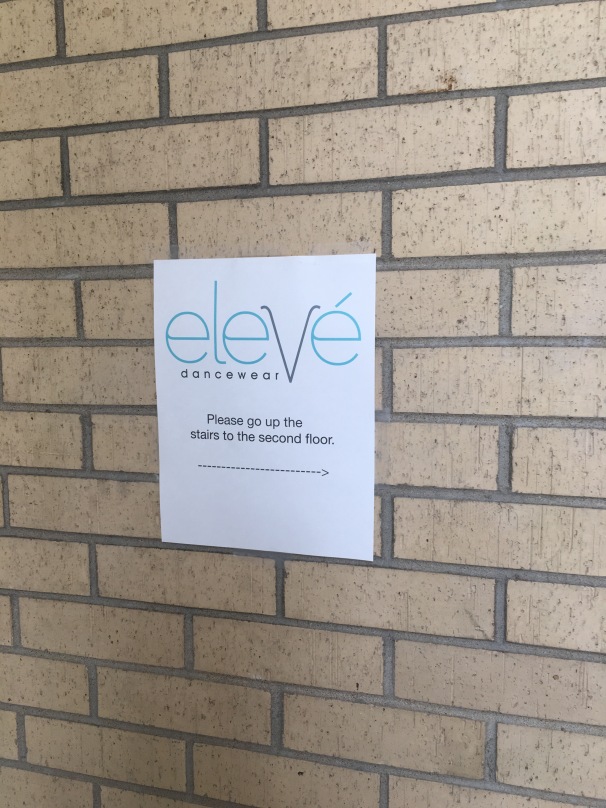 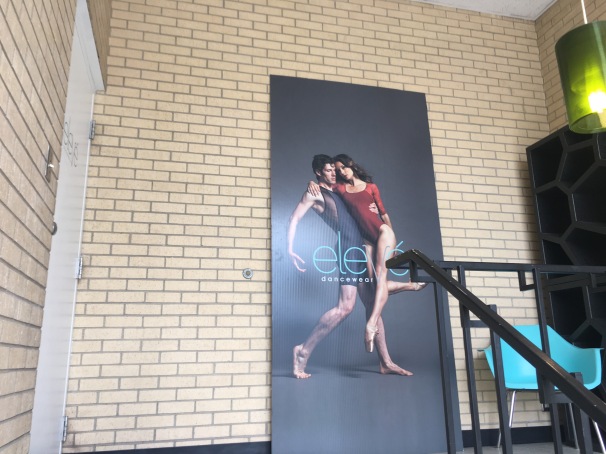 It felt like we were in some super fancy fashion district or something.

You open the door and ta-da! You’ve entered heaven. 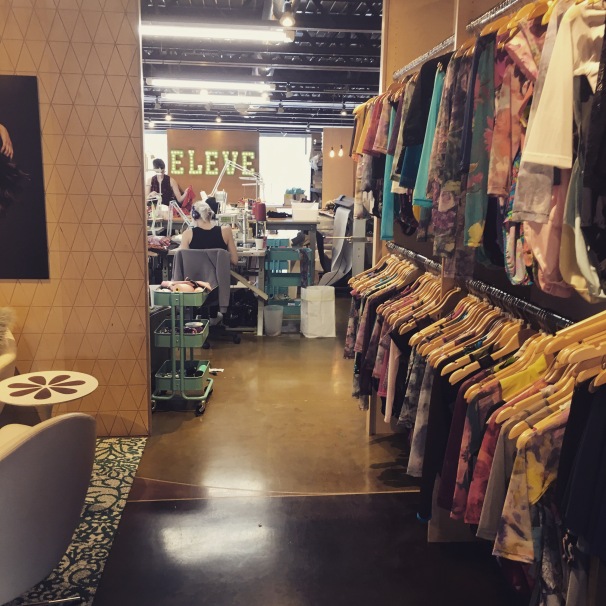 We were greeted by a nice lady who showed us where everything was. On the right is all the leotards. She showed us what was the kids section, and on the left is the longer skirts and specialty things.

After taking a second to realize this is reality, I got to looking.

I was nervous that they might not have much in my size already made. I often get nervous going into big named dance places, afraid I’ll be judged as I don’t look like a dancer. When I confessed this to a friend she told me, “be a swan, not a chicken!” I held to that and went for it. Obviously I’m grateful I did.

On the left side was the men’s section, along with the longer skirts and other various things.

I found two leotards I really loved and decided to try them on. I was still nervous they wouldn’t quite fit. The measurements are perfect everywhere but my hips, which fluctuate anyway. I held my breath and went for it.

And they were perfect. And I was so happy.

I tried on a skirt, since they’re similar styles to the ones that are currently all the rage at my studio. Super cute, but they way they’re cut made me too nervous that they’d make my hips look worse to take the risk and spend the money on one. I was right. It fit, but when it inevitably found its way to my waist instead of hips, it looks awkward. Which was great to know! I’ll stick to wrap skirts. But these would be super cute on my friends. And they’re a great price and coordinate with the leotards. 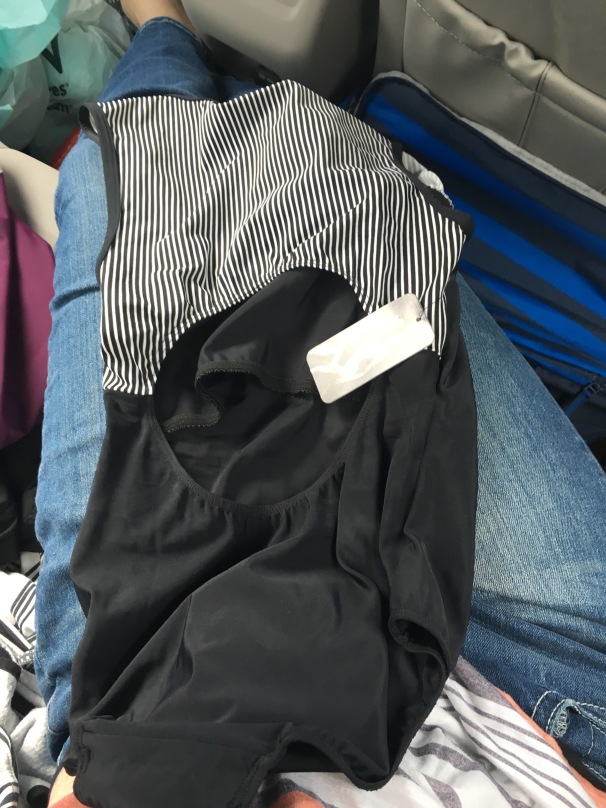 The lady that helped us came forward coincidentally at the perfect time.

She introduced herself as Jessica, the one who had responded to my email asking if they were closed for Memorial Day, and was shocked that I was ready so quickly. I told her I had creeped the website and knew was I was looking for.

She was really nice and rang me up, then told me about the 10% off they were offering currently. I told her I was from Texas and my aunt lives close so we came by and she told us how she loved when people came from out of town, especially how they’d post somewhere about it and all their friends would be jealous. (Hey friends 😉) I told her about my blog and how I definitely had loads of friends who wished they were also there. She told me that if I wanted to make a custom order, doing so in store cuts productions time to two weeks instead of six weeks if you were to order online. So of course I wanted to. She showed me where the different fabrics were and told me to take a look around. 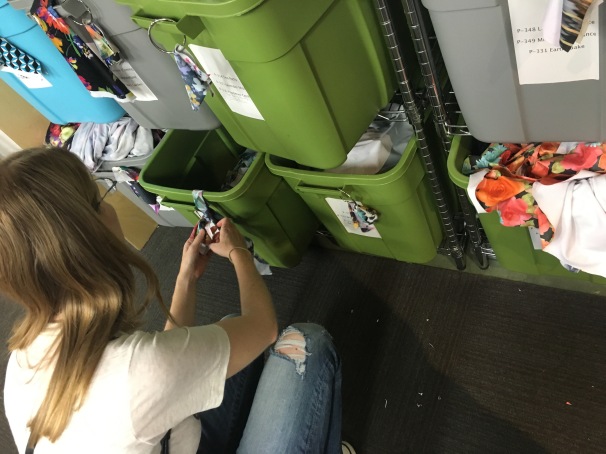 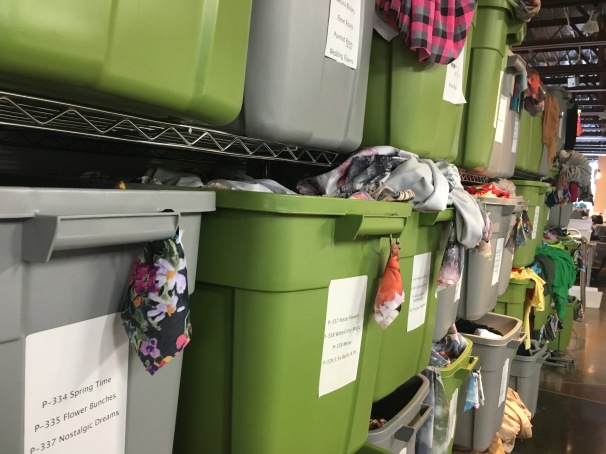 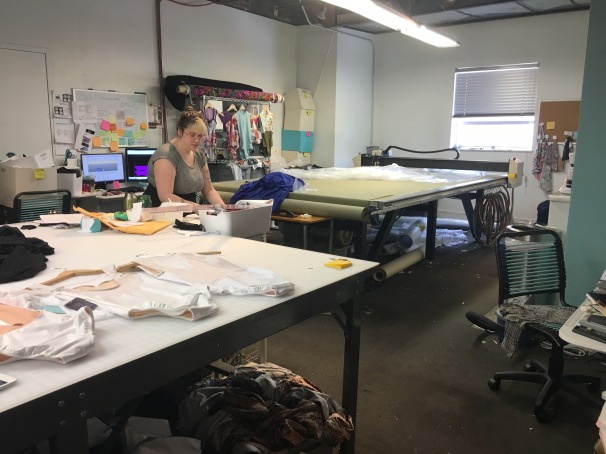 Emily was back there, working on a few things, and was also nice as can be. They were focused. And it made me feel at home.

I decided on a Sally with

On top and a lipstick pink on bottom.

Jessica finished ringing us up, and told me I’d also qualify for tax free (I don’t know how but I’ll take it) (I think that’s what she said at least. Anyway, it was a slick discount) on top of 10% off and free shipping. I was on cloud nine.

She wrapped it all up for me, gave me their card, and I was so elated I almost went into a bathroom instead of the exit door.

I posted about it on Instagram, to which they liked and commented.

They’re such an incredible company, and the quality of their leotards is top notch. Plus the fit is fabulous. I’m so happy, y’all.

(You should check them out if you get the chance.)

I still can’t believe I got to go, and I’m so excited for my custom order to come in as well. Nothing but love and respect for Eleve. (My phone isn’t doing the little accent mark. Ugh.)

I’m at my aunt’s house which essentially is like a Jane Austen novel come to life.

I also took this picture, which I had taken before in September of 2014.