Yesterday I got to see a friend I haven’t seen in 12 years.

I was 14 when I met her. Just put that into perspective there.

Anyway, she came into town and was able to pop over to where I was for a conference and hang out for half an hour. Not near enough time to catch up on everything, but more than we’ve had in a very long time.

It was so great to hear where life has taken her. We met in speech and debate class, being the two Christians in a very perverted environment (still an environment with many great and wonderful people regardless) so even though I only had her a year, she still watched out for me and made sure I made the transition from private/Christian school into the belly of the public school world alright.

Her class had many talented people in it, and twelve years later she’s the one with the theater career. Which is kinda funny, considering she’s not the one we really would have hands down known for sure she would be this successful. Always talented, for sure, but like. The ones we thought were shoe ins aren’t in the industry. We both kind of laughed about this. (It makes me even more proud of her, honestly.)

She began ballet and tap classes in January and has loved getting into them! I, of course, loved hearing that she was getting into dance and loving it so much. She told me yesterday that I was a real inspiration into her taking the plunge.

Me? An inspiration to her?

I’m just a little ol’ nobody chasing a “pointless” dream because it’s my life and I can. It’ll never be my career or anything more than fun, really, and some see it as a waste of time. (That’s another blog post for another day.) but she’s telling me that little ol’ me is inspiring her, who has the impressive resume and talent and has made a career of what she loves.

I still can’t seem to find words to accurately describe what it meant to me to hear her say that. Like. How cool is that?

Yesterday I posted a picture I took after class Wednesday. It’s a little rough, but I posted it anyway because it wasn’t rough enough to hide away. This is all a progress anyway, we strive for perfection but will never attain it. It was met with largely positive feedback from my friends and even some strangers, but then I started noticing the influx of “likes” it was getting. This meant the inevitable.

The first one wasn’t so much hate as it was sort of a dig on themselves. It made me laugh, nonetheless. Then I started getting those comments where it was people tagging their friends, either in the picture I posted or my last video (from about a month ago.) I posted a picture today of the picture yesterday with a side by side of a “fail” picture, just for kicks. That’s when I got my first real hate comment.

I could just block these. Or delete them. Or ignore them. Instead, I choose to respond. Because the internet isn’t just this fast thing run by robots. Instagram accounts are of real people (mostly, you know what I mean.) with real lives who can see and read the comments you leave. Even in another language, they can translate it and see what you’re saying. So I commented on how I can see what she’s saying. And how she probably didn’t realize that I have health issues that hinder me from losing weight, or how I used to be anorexic which essentially threw me into these health issues. I made reference to her description that says “always be yourself, unless you can be a unicorn. Then always be a unicorn.” By saying that unicorns don’t leave hate like that, unicorns are kind and all this other stuff.

I didn’t let it get to me, though. Thankfully the internet wasn’t as advanced when I was younger as it is now. Back then it may have eaten at me, or fueled the fire, but now I realize theirs more to life than trying to fill the opinions of strangers, and even so there’s only so much of my life I can control. There’s only so much I can do about my size. And that’s okay. I can only be the best version of myself. Anything more than that is unrealistic and exhausting.

To that one negetive comment, I’ve had at least five positive and extremely encouraging ones, including this one from a new friend. 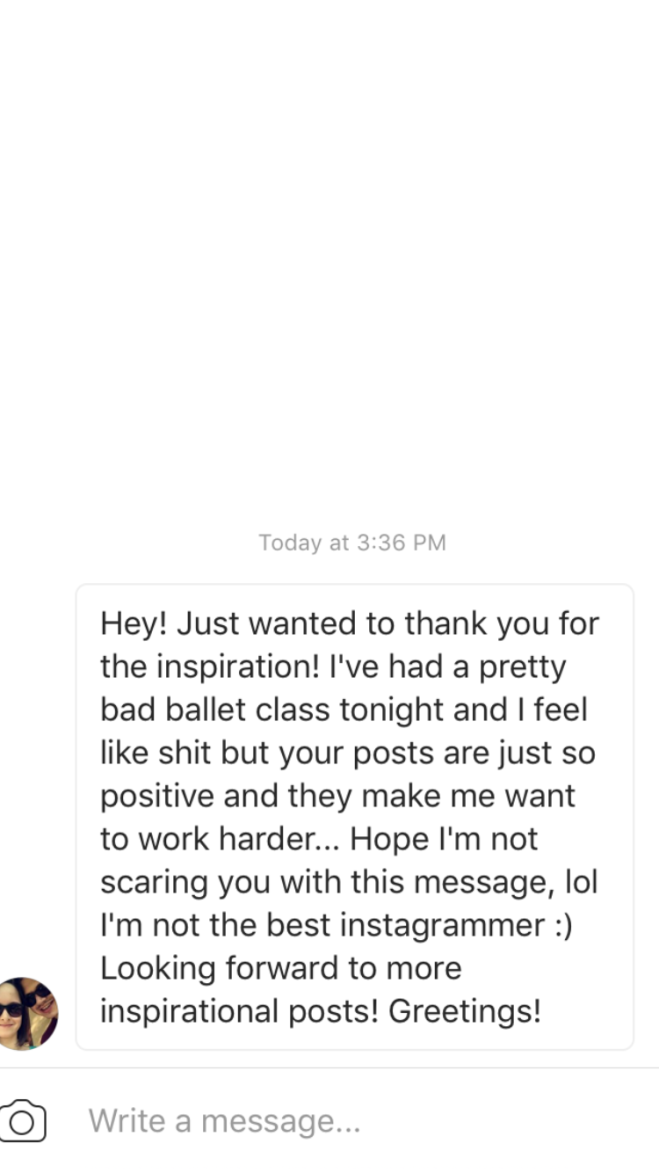 I’d be lying if I said this didn’t make me smile like a fool by myself and heart to feel warm.

This is what it’s about. Working hard, doing our best, being real and true to ourselves. Kindness is free. And really, what better way to greet the world?

Think of your worst day you’ve had. How hard it was, how much you cried, how you contemplated giving up. Now think of how it could have been improved upon if you just had someone there. Someone to remind you of your value, of how much you have to offer the world. Someone to encourage you to give it one more try. That it’s okay to cry and be sad, as long as you don’t stay there too long. If we could be that to someone, why wouldn’t we? If we can bring encouragement, why would we hold that back? I know I’m not the first person to start ballet as an adult, and I won’t be the last. I know that it’s a struggle some days, but now that I’m past the brunt of that the beginning brings, why would I not encourage other people that fighting for what your heart longs for is worth it?

We have two newer girls in our adult ballet class, and seeing the light in their eyes as they asked me about getting en pointe and what to work on inspires me. To them, I was goals, I was possibility. I may never be a professional dancer, on a stage for hundred, inspiring people to be like me, but on Wednesday I was the inspiration for those two, showing them it’s possible, showing them it’s not too late, showing them dreams aren’t pointless.

And honestly, when my life flashes before my eyes right before I die, things like this will be counted amongst some of my greatest achievements.